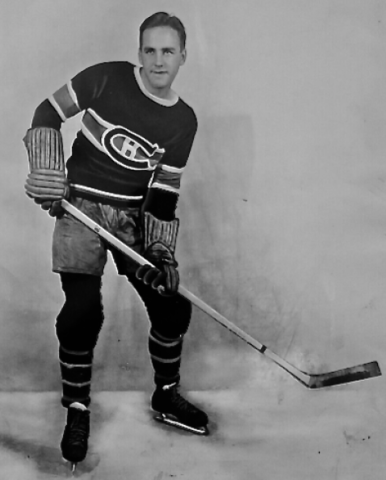 Growing up in Montreal, well if you are a boy, most likely you will play Hockey, especially in the 1920s. Haynes attended Loyola College, a hotbed of Hockey teams. He also was a star boxer and quarterback for their football team, but Hockey was where his heart was at.

Haynes was then signed by the NHL Montreal Maroons for the 1930-31 season, scoring his 1st NHL goal on John Ross Roach of the New York Rangers on November 25, 1930.

Haynes played 19 games with the Maroons, scoring just 1 goal before they sent him to the Windsor Bulldogs, their farm team for the remainder of the season. Haynes helped the Bulldogs win the F. G. "Teddy" Oke Trophy as 1931 International Hockey League / IHL champions. On the team with Haynes was Baldy Northcott, a star with the Maroons that also split his 1930-31 season between Windsor and Montreal. Playing goal was NHA & NHL legend Clint Benedict who was capping off his playing career with the Bulldogs.

Haynes was back in Montreal the next season, and would play for both the Bulldogs and Maroons for the next three seasons.
His best season with the Maroons came in 1932-33, scoring 16 goals (25 assists).

Haynes played the first 7 games of the 1934-35 season with the Maroons, and then he was traded to the Boston Bruins, where he finished the season, playing 37 games, scoring 4 goals (3 assists). Boston traded Haynes to the Montreal Canadiens for Jack Riley, September 30, 1935.

Now playing for the Canadiens, Haynes would focus on his skills as a defensive centre. He was not a pure goal scorer, but more of a setup man. He did score 13 goals (22 assists) playing on a line with Toe Blake and Johnny Gagnon during the 1937-38 season.

Haynes served as a pallbearer for teammate and Canadiens legend Howie Morenz at his funeral in March, 1937 at The Forum in Montreal.

Haynes was cut from the Canadiens seven games into the 1940-41 season by coach Dick Irvin because he missed a pre-game team dinner at their hotel in New York with the Canadiens prior to a game with the New York Rangers. Why did he miss the practice ? To attend the opera in Manhattan. He joined the New Haven Eagles of the American Hockey League / AHL to finish out the season and his pro Hockey career. Haynes played 31 games with the Eagles, scoring 3 goals (11 assists).

Haynes returned to Montreal and the Canadiens, but as a scout and coach for the Montreal Senior Canadiens of the Quebec Senior Hockey League / QSHL. It was there that Haynes would affect Hockey history, as a young player named Maurice Richard was on the team, playing left wing in 1941. Haynes had noted his strong backhand shot and explosive speed with exceptional strength and decided to move Richard to right wing, which would give him more opportunities of scoring. Haynes later recommended Richard to Dick Irvin for the NHL Canadiens, and he would later turn into "Rocket Richard"