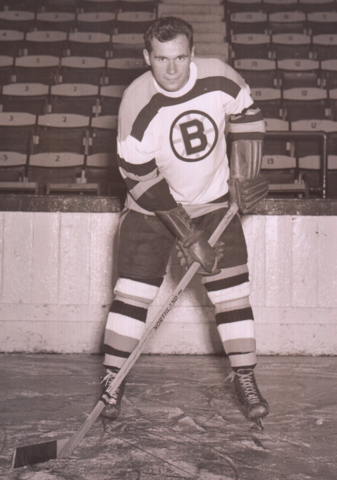 A solid positional defenceman who could head-man the puck effectively, Ed Kryznowski played in 237 NHL games with the Boston Bruins and Chicago Black Hawks in the post-war years.

Kryznowski starred with the University of Toronto Varsity Blues Men's Hockey team in 1946-47 and 1947-4. Kryzanowski was a true leader who could head-man the puck like no other. Lauded by his teammates as "the best player on the team," Kryzanowski led the Varcity Blues to win the Canadian Intercollegiate Hockey title in both seasons he served as captain.

Turning pro in 1948, he split the 1948-49 season between the Boston Bruins and the AHL's Hershey Bears then assumed a regular place on the Bruins for three years.

In August 1952 he and Vic Lynn were sold to the Chicago Black Hawks. Kryznowski's best days were behind him at this point and he only played five NHL games in 1952-53.

Kryzanowski spent his last years of pro Hockey with the Providence Reds, and the Hershey Bears before retiring in 1956.

Ed Kryzanowski was inducted into the University of Toronto Varsity Blues Hall of Fame in 2006.