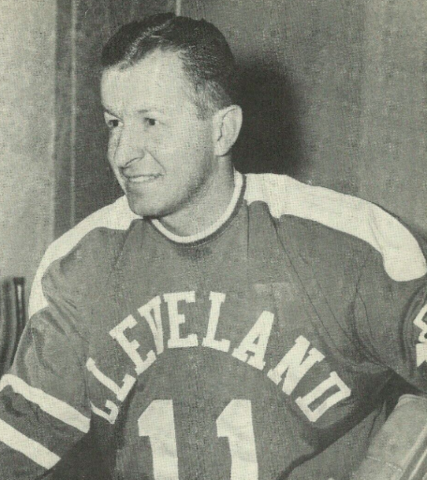 Thurier then split the 1941-42 season with the Indians and the now NHL Brooklyn Americans, playing in 27 NHL games, scoring 7 goals, 7 assists.

Thurier was arrested by the RCMP for failing to report to military training in November, 1942. He had started the 1942-43 season with the Buffalo Bisons in the AHL, but after being arrested and released, finished the season with the Montreal Army Hockey Team in the QSHL, playing there for another season too.

Thurier was claimed by the New York Rangers from Brooklyn in Special Dispersal Draw, September 11, 1943, and rejoined the AHL Buffalo Bisons for the 1943-44 season, having a solid year, scoring 33 goals, 40 assists in the regular season, then 8 goals, 10 assists in the playoffs, helping the Bisons win the 1944 Calder Cup championship as AHL champions.

The Bisons were the farm team for the NHL New York Rangers, and after his solid season with the Bisons, Thurier joined the Rangers for the 1944-45 season, as the Rangers were missing many of their regulars who were serving their country during the war years. Thurier scored 16 goals, 19 assists in what would be his only full season in the NHL.

Thurier then joined the AHL Cleveland Barons in 1945, and would become one of the all-time greats in Barons history. In total, Thurier spent 7 seasons in Cleveland. He was a big part of the team that set a professional Hockey record by going undefeated though 31 straight games during the 1947-48 season, and was the first AHL league player to score 300 goals and ended his career as the league's all-time scoring champion with 319 goals and 425 assists. Thurier also helped the Barons win the 1948 and 1951 Calder Cup championships, along with reaching the AHL finals in 1946 & 1950. The Fox led the Barons in scoring in the 1950-51 season and Calder Cup campaign with 108 regular-season and playoff points.

After retiring as a player in 1952, Thurier became a AHL referee for several years.

Fred "The Fox" Thurier was inducted into the Greater Cleveland Sports Hall of Fame in 1978.

Alfred “Al” Thurier was inducted into the Mount St. Charles Hall of Fame in 2013.