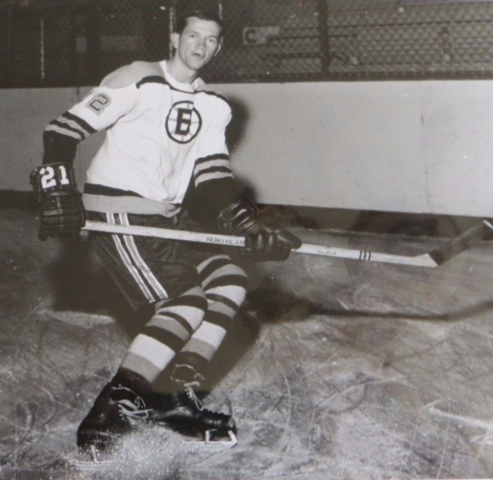 Buchanan's road to the pros began as a rookie in major junior hockey with the OHA's Oshawa Generals in 1963-64. In that first season Buchanan turned in a tremendous offensive effort, scoring 52 goals and 99 points in 56 games. The following year he scored 50 goals and 103 points to lead the Generals in scoring for the second year in a row. Among other well known players on that team included; a very young Bobby Orr, Wayne Cashman and Danny O'Shea.

In 1964-65, Buchanan turned pro with the Minneapolis Bruins of the CPHL and then played for two seasons for the Oklahoma City Blazers of the CPHL before getting the call to play for the Boston Bruins for three games in 1966-67, where he was held off the scoresheet. Over the next three years, Buchanan toiled in the minors with the Kansas City Blues and the Quebec Aces of the AHL before getting the opportunity to play two more games in the NHL, this time with the St. Louis Blues in 1969-70. Once again he was held pointless. That was the last time Buchanan played in the NHL.

After a couple more years in the minors, Buchanan signed with the new WHA and the Cleveland Crusaders for the 1972-73 season. In 75 games he scored 37 goals and 81 points, marking the best pro season of his career, in any league. He remained with the Crusaders for another year-and-a-half before being traded to the Edmonton Oilers during the 1974-75 campaign. Later that season he was on the move again, going to the Indianapolis Racers. Buchanan's final pro season was in 1975-76, when he played 23 games with the Racers, scoring four goals and eleven points.

After his retirement, Buchanan was briefly the head coach of the Los Angeles Blades of the PHL.