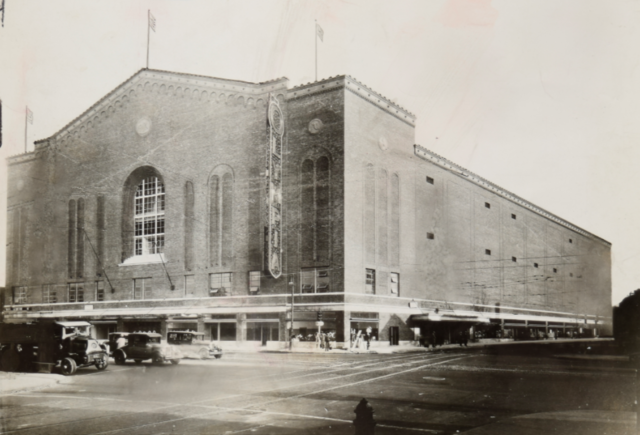 The Olympia opened on October 15, 1927; at that time the only other buildings that exceeded its seating capacity were Madison Square Garden and the London Olympia.

The Detroit Cougars played their first game at the Olympia on November 22, 1927, and Detroit's Johnny Sheppard scored the first goal at the new building. However, the visiting Ottawa Senators defeated the Cougars, 2–1. The Cougars later became the Detroit Falcons and finally, in 1932, were named the Detroit Red Wings by new owner James E. Norris.

In addition to the Red Wings, the Olympia was also home to the Detroit Olympics International-American Hockey League minor league team in the 1930s and the NCAA Men's Ice Hockey Championship (known as the "Frozen Four") in 1977 and 1979.

On December 15, 1979, three days after the first event held at Joe Louis Arena, the Red Wings played their final home game at the Olympia, a 4–4 tie against the Quebec Nordiques. Attendance at that game was 15,609.

The building was 32.6 m (107 ft) tall and constructed of a steel frame faced with red brick with brown terra cotta and stone trim in a Romanesque Revival style. The Grand River and McGraw facades originally included 13 storefronts. Near the parapet were terra cotta medallions depicting various athletes. When it opened, Olympia contained the largest indoor skating rink in the United States at 242 ft (74 m) by 110 ft (34 m).

The Grand River facade featured three-story arched windows with a large recessed arch in the center. The large arch originally was filled with black glass, however in later years it was covered with wood painted with the Red Wings emblem. Topping the facade was a pediment creating a gable-shaped roof.

The arena had five levels. The ground level through which patrons entered and featured a concourse that circled the seating area. Above were the mezzanine, main seating level and balcony. A fifth level not open to the public was just under the roof trusses. The trusses spanned 186 ft (57 m) and were 90 ft (27 m) above the floor.

The initial seating capacity was 11,563. On June 23, 1965, work began to add 81 ft (25 m) to the rear of the structure. The addition was four stories high and included additional seating and an escalator to improve patron access to the upper levels. It expanded seating to 13,375 in 1966 with standing room for 3,300 during Hockey games. In addition to the new seats, the original 11,563 seats were replaced at a cost of $23 each and new boards and timeclocks were installed.

While not one of the most decorative, architect C. Howard Crane considered Olympia one of his most significant buildings. He noted the importance of the refrigeration system buried beneath the concrete. Within the 77,393 sq ft (7,190.0 m2) of available floor space were 74,880 ft (22,820 m) of piping. The system was replaced in 1967 and the final modification to the building was the addition of private boxes in 1970.

The Olympia was demolished in September 1987.