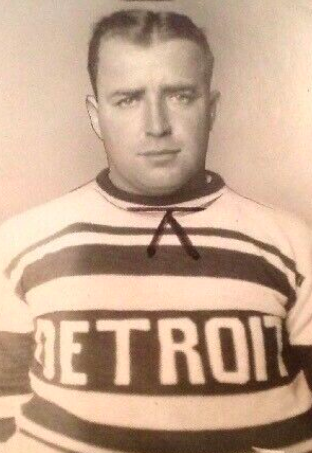 Rockburn only played 2 games for the Shamrocks before jumping leagues to the North East Hockey League / NEHL for the 1926-27 season. Rockburn played for the Berlin Mountaineers, scoring 6 goals, 4 assists and being voted the the NEHL All Star Team.

Rockburn signed as a free agent with Stratford of the Canadian Professional Hockey League / CPHL on October 24, 1927, and only four days later was traded to the Detroit Olympics where he spent the next two seasons playing under coach Frank Foyston.

Rockburn made his NHL debut with the Detroit Cougars for the 1929-30 season, playing in 36 games, scoring 4 goals. The Cougars became the Falcons for the 1930-31 season, and Rockburn played another NHL season in Detroit.

Rockburn returned to the Detroit Olympics team in 1931-32, now of the International Hockey League / IHL, scoring 6 goals, 9 assists during the season.

Rockburn was then traded to the Providence Reds of the Canadian-American Hockey League / Can-Am prior to the 1932-33 season, and after just 4 games into the 1932-33 season, Rockburn was traded by the Reds to the Montreal Maroons who assigned him to the IHL's Windsor Bulldogs, where he played 18 games, and then traded again to the NHL Ottawa Senators for cash, February 2, 1933, where he played his final 16 NHL games of his career.

Rockburn then joined the IHL's Cleveland Falcons for the 1935-36 season. Although he spent the majority of the 1935-36 season with Cleveland, Rockburn was loaned to the IHL's Rochester Cardinals midway through the season where he played in one game before returning to Cleveland.

Unable to compete during the 1938-39 season as he was being reinstated as an amateur, Rockburn returned to the game in the 1939-40 season with the Ottawa City Hockey League / OCHL's Ottawa Lasalle, and retired at seasons end.