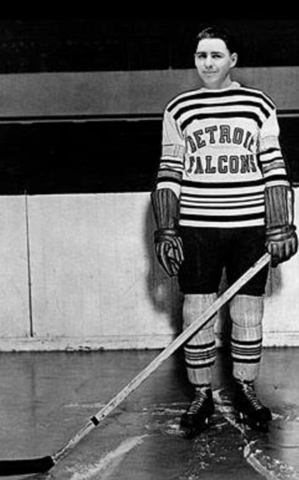 Young then joined the Canadian Professional Hockey League as a member of the Kitchener Millionaires (later renamed the Toronto Millionaires) as a sound defensive Hockey player.

The Cleveland Indians of the IHL took notice and Young signed with the new International Hockey League club in 1929, making the "First All-Star" Team in 1930.

Young was claimed by the Philadelphia Quakers from Cleveland in a Inter-League Draft, May 9, 1931. Then claimed by the New York Americans from Philadelphia in the Dispersal Draft, September 17, 1931. Then traded to the Detroit Falcons by the Americans for Ron Martin, October 18, 1931. Young had found his NHL home with the Detroit Falcons. In the 1931–32 season Young made his NHL debut and posted a career-high ten goals in his rookie campaign. He would continue to knock in a few goals and play sound defensive Hockey for Detroit (now renamed the Detroit Red Wings).

Jack Adams was impressed not only with Young's play but his leadership abilities and named him captain prior to the 1935-36 campaign. Young had his best year with 5 goals and 17 points. Young, who was at times described as "dashing" and "a star," ranked as the third highest scoring d-man in the league that year, and played a nice role in helping Detroit eliminate the Toronto Maple Leafs three games to one to win the Stanley Cup championship that spring.

Misfortune struck Young in 1936-37 when in December, 1936 in a game vs the New York Americans, he was checked hard into the boards and fractured his ankle. He was out for the season and the playoffs and never was the same again. Yet his Red Wings repeated as Stanley Cup champions, technically with Young still as captain, and had his named engraved on the cup.

Young had a tough year when he returned for the 1937-38 season, as the Red Wings missed the playoffs. The 1938-39 season was better, and Young was selected to appear in his first All-Star Game in 1939, but during the playoffs, the Red Wings lost in the semi finals to the Toronto Maple Leafs.

Young was signed as a free agent by the Montreal Canadiens, October 30, 1939, where he would play his last 50 games in the NHL. Young was claimed on waivers by the Toronto Maple Leafs in 1940 and was set down to their farm team, the Providence Reds of the American Hockey League. Young finished out his career scoring 22 points for the Reds in the 1940–41 season, and was selected to the AHL First All-Star Team.

After his retirement in 1941 Doug Young went on to pursue a career as an NHL linesman for 17 years, was the referee-in-chief of the IHL and worked for the Detroit Red Wings home office.