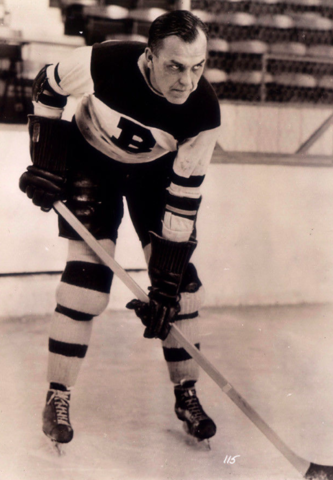 Emms was as controversial as he was successful during close to 60 years in Hockey, and will always be right near the top of the list of men who had the greatest impact on the game - good and bad.

Emms then played 1 season of senior Hockey with the OHA Brantford Seniors in 1925-26.

Emms then turned pro with the Stratford Nationals of the Canadian Professional Hockey League / Canpro in 1926, scoring 10 goals, 5 assists during the season. The Montreal Maroons signed Emms as a free agent November 10, 1926. Emms played 8 games for the Maroons during the 1926-27 season, with 0 points.

Emms played for both the Maroons and Stratford during the 1927-28 season, having just 1 assist with the Maroons over 10 games, and 8 goals, 5 assists with Stratford in 29 regular season games, and 1 goal in the the playoffs, as the Nationals won the 1928 Canpro championship.

Emms played with the Windsor Bulldogs the next season, scoring 21 goals, 5 assists during the regular season, and 6 goals, 3 assists in 8 playoff games, as the Bulldogs won the 1929 Canpro championship.

Emms played for the Bulldogs for 1 more season, who were now in the new International Hockey League / IHL, and he had another solid season, scoring 21 goals, 16 assists in 38 games.

Emms started the 1931-32 season with the Americans, but after 13 games was sent down to their farm team, the New Haven Eagles in the Can-Am league, where he played just 5 games before the Americans traded him to the NHL Detroit Falcons with Frank Carson for Tommy Filmore and Bert McInenly, December 29, 1931, where he finished the season.

Emms then signed as a free agent with the Boston Bruins after securing release from Detroit, October 28, 1934, playing just 11 games for the Bruins before they traded him to the New York Americans with Obs Heximer for Walter Jackson, December 14, 1934.

Emms would play for the Americans until they traded him to Detroit for John Sorrell, February 13, 1938, and then the Red Wings sent him to their farm team, the Pittsburgh Hornets of the International-American Hockey League, playing in Pittsburgh until 1939.

Emms signed with the American Hockey Association / AHA Omaha Knights in 1939 as a player / coach. Emms scored 19 goals in the 1939–40 season, and led his team to the AHA finals. Emms broke his leg part way through the 1941–42 season. He remained on the team as coach, and led the Knights to the 1942 Harry F. Sinclair Trophy championship as AHA champions.

After WWII, Emms returned to coach the St. Louis Flyers of the AHA in the 1944–45 season, and played the final two games of his career. Six games into the 1945–46 season, Emms left St. Louis to return home.

After retiring from playing, Emms founded the Barrie Flyers, and would become the owner and coach of the Flyers of the Ontario Hockey Association / OHA from 1945 to 1960. Barrie won its first J. Ross Robertson Cup (1948) as OHA champions in the teams third season of play. The Flyers then won the 1948 George Richardson Memorial Trophy as Eastern Canada champions. The Flyers played in the 1948 Memorial Cup, losing to the Port Arthur West End Bruins. Barrie repeated as OHA champions the following season, defeating the Toronto Marlboros for the 1949 J. Ross Robertson Cup; in the Eastern Canada finals, Barrie lost to the Montreal Royals.

A very religious man, Emms refused to coach on Sundays. Emms was involved in controversy during the OHA playoffs in 1953, when he refused to play a Sunday playoff game for religious reasons, and when he had a goal judge handcuffed and removed from Barrie Arena. The Flyers would go to win the 1953 J. Ross Robertson Cup championship as OHA champions, the 1953 George Richardson Memorial Trophy championship as Eastern Canada champions, and the 1953 Memorial Cup championship with Emms coaching, and future Boston Bruins stars, Doug Mohns and Don McKenney, among others on the team.

“Coached me with the Barrie Flyers,” later stated by Don Cherry, “and he said some of the crudest and rudest things I ever heard in my life.”

“He was hard to like but easy to respect,” says Bob White, who won a Memorial Cup in 1953 with Hap behind the bench of the Barrie Flyers.

Emms moved the Barrie Flyers to Niagara Falls, Ontario in 1962, slowly relinquished coaching duties to others, but continued as team owner, and general manager. The Flyers in both Barrie and Niagara Falls were sponsored by the Boston Bruins, until the direct NHL sponsorship of junior clubs halted in 1966–67. The jerseys worn by the Flyers in the 60s and 70s were actually old Boston Bruins sweaters that were hand-me-downs with the Bruin logo replaced by the Flyer pinwheel.

The Niagara Falls Flyers finished in 1st place in the OHA in 1963, winning the Hamilton Spectator Trophy, and then won the 1963 J. Ross Robertson Cup championship as OHA champions, the 1963 George Richardson Memorial Trophy championship as Eastern Canada champions, but lost to the Edmonton Oil Kings in six games in the Memorial Cup final.

While owning the Niagara Falls Flyers, Emms became the general manager of the NHL's Boston Bruins from 1965 to 1967, the third GM in the team's 41-year history. He succeeded Lynn Patrick and brought such players as Bernie Parent, Pit Martin, John "Pie" McKenzie, Gerry Cheevers, Gilles Marotte, and Gary Doak to the Bruins. In addition, he promoted Harry Sinden to coach in 1966, and was the general manager who signed Bobby Orr, and was also there for Orr's first season in the NHL. However, the Bruins were in the midst of an eight-year slump; they failed to make the playoffs during Emms' two seasons, and he was replaced by his assistant manager, all-time Boston great Milt Schmidt.

In the spring of 1967. Emms then returned to Niagara Falls, Ontario, to resume command of his junior Hockey club. Schmidt, meanwhile, pulled off the blockbuster trade obtaining Phil Esposito, Ken Hodge and Fred Stanfield (in a deal that included Martin and Marotte), surrounding Orr with the talent to make the Bruins a Stanley Cup contender. Still, the OHA Flyers contributed materially to Boston's 1967–1972 success, with Don Awrey, Jim Lorentz, Don Marcotte, Derek Sanderson and Ed Westfall all having prepped for their NHL careers with Emms' junior team.

After 1968, many of the players graduated to higher leagues, and the Flyers struggled for the next four seasons, missing the playoffs twice, and winning only one playoff series.

Emms, a lifelong teetotaler, abhorred alcohol and detested foul language. He fined players a dollar per dirty word, which left some players almost mute and penniless.

In 1972, Emms sold the Flyers (the team was relocated to become the Sudbury Wolves) and immediately bought the neighboring St. Catharines Black Hawks. Emms was suspended that year by the OHA for an incident involving the Toronto Marlboros' Mark Napier, who had signed a pro contract to play for the WHA's Toronto Toros. The contract was not to take effect until after his junior season was complete, but Emms felt it was wrong to have a player he deemed a professional playing in junior Hockey. Emms and son, Paul, who was the coach of the Black Hawks, allegedly ordered their players to wear their sweaters backwards and play with their sticks upside down in protest. The Flyers were pounded 14-0 by the Toronto Marlboros, and Emms was fined $1,000 and suspended for the balance of the season by the OHA.

The Black Hawks later won the 1974 J. Ross Robertson Cup as OHA champions, advancing to the Memorial Cup playoffs. However attendance ultimately hit rock bottom, so Emms then moved the club to Niagara Falls in 1976, becoming the second incarnation of the Niagara Falls Flyers.

Emms then sold the Flyers franchise to Toronto businessman Reginald Quinn in 1978, but not before declaring Wayne Gretzky unfit for the OHL battlefields, and passed on selecting him with the second overall pick, but chose Steve Peters instead.

While Emms may have passed on Gretzky in the draft, 8 times Emms took clubs to the Memorial Cup and four times his teams went home with the championship.

The Ontario Hockey League / OHA's Emms Division was named in his honour.

The Emms Family Award was donated in 1973 by Emms, as an annual award to recognize the OHL Rookie of the Year,

The Hap Emms Memorial Trophy was created in 1975, to recognize the outstanding goaltender at the Memorial Cup tournament.

Leighton "Happy" or "Hap" Emms was inducted into the Barrie Sports Hall of Fame in 1985.