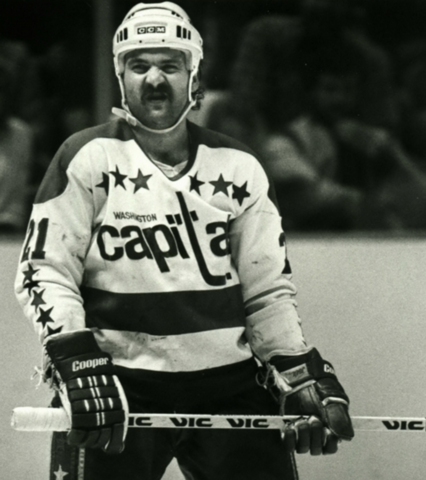 His nickname was ‘Pee-Wee’

Maruk played junior Hockey for the Markham Waxers and Toronto Marlboros, before being traded to the OHA London Knights, where he recorded 112, 113 and 145 points in his three seasons with the team before he was drafted in 1975 by the California Golden Seals.

As he entered the NHL in 1975-76, he sported a fu manchu moustache that was not exactly fearsome in appearance. What was frightening for the opposition, however, was his ability to steal pucks and explode down the ice on breakaways. There were few players in the league who engineered as many one-on-none scoring chances as Maruk. He was fleet of foot, could stickhandle smoothly, and carried a wrist-shot that packed some pop.

While with the Golden Seals, he became the first NHL rookie to score five shorthanded goals in a season, and scored 30 goals and 32 assists as a rookie during the 1975-76 season.

Maruk followed the franchise when it relocated to Cleveland to become the Cleveland Barons a year later.

Maruk was selected to play in the 31st National Hockey League All-Star Game in the Buffalo Memorial Auditorium on January 24, 1978.

Maruk's rights were later obtained by the Minnesota North Stars after the Barons merged with them in 1978, but was quickly informed by North Stars GM Lou Nanne that with centers Bobby Smith and Tim Young already in the fold, Maruk would be dealt. After failing to pull the trigger on a deal during the off-season, Minnesota dressed Maruk for two games in October 1978 before trading him to the hapless Washington Capitals for their first round draft choice. Minnesota used the pick to select highly regarded Tom McCarthy.

Maruk blossomed into one of the league’s elite scorers with the Capitals.

Maruk elevated his play to 90 points in 76 games in his first season with the Caps. However his second season was forgettable. He was on pace for another 80-plus point year but injuries shortened his season to just 27 games.

In 1980-81 he scored 50 goals and 97 points on a Washington team that managed only 70 points and finished out of the playoffs. The following season - centering a line with gritty left winger Ryan Walter and one-year-wonder Chris Valentine - Maruk compiled a remarkable 60 goals and 136 points, good enough for fourth place in the NHL scoring race, and it remains a Capitals scoring record for a single-season.

Maruk was the first Capitals player to score 100 points in a season.

Maruk was selected to play in the 34th NHL All-Star Game held in the Capital Centre in Landover, Maryland, home to the Washington Capitals on February 9, 1982. One by one, the Prince of Wales and Campbell Conference players were introduced on their respective bluelines – Gretzky, Bossy, Stastny, Coffey, Bourque and Robinson. However, the crowd only rose to their feet in unison when the final player was introduced; the greatest cheers that day rang out for #20, Dennis Maruk.

Despite breaking Capitals individual scoring records, Maruk was switched to left wing in 1982-83 to make room for sophomore hotshot Bobby Carpenter. Maruk was left to toil on a line with grinders Doug Jarvis and Ken Houston, but managed a respectable 81 points. Maruk was one of the players instrumental in leading the Capitals to their first playoff appearance that season.

In the summer of 1983, he was dealt back to the North Stars for just a second round draft pick. Lou Nanne joked that he just lent me to the Capitals for five years.

The move back to Minneapolis was his final NHL destination. He skated for another five-plus seasons of reasonably solid offensive production before being demoted to the Kalamazoo Wings of the IHL where he retired in 1988-89.

Maruk made just his second playoff appearance with the North Stars in 1984.

Only nine players in league history have scored as many goals in a single season as Dennis Maruk and only eight players equaled or surpassed his single-season point totals.

Maruk scored at least 30 goals six times during his career.

Ten years after his retirement from hockey, the name Dennis Maruk once again appeared on professional hockey box scores. Maruk, who was living in Lake Charles, Louisiana, suited up for eight games this season with Lake Charles Ice Pirates in the Western Professional Hockey League, a very low minor league made up of teams from Texas and Louisiana. However Maruk's story was not about an old player making a silly comeback. Maruk reasoned he was just "filling in because the team had some injuries and were short a few players." Maruk picked up two assists.