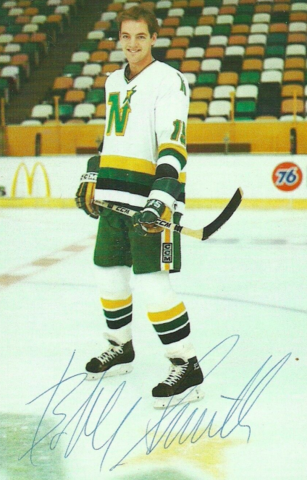 Smith grew up in Ottawa, playing for the Golden Knights organization. He joined the Ottawa 67's in the Ontario Major Junior Hockey League / OMJHL in 1975, Smith led the 67's to the 1977 J. Ross Robertson Cup championship as OHA playoff champions, and the 1977 Memorial Cup championship game, losing to the New Westminster Bruins. He was named to the Memorial Cup All Star Team and won the 1977 George Parson's Memorial Cup Trophy as the "Most Sportsmanlike Player"

Then in the 1977–78 season, Smith set league records that still stand more than thirty years later for most assists (123), most points (192) and Most Power-Play Goals (5) in One Game (October.2.1977) all in a single season, leading the 67's to the 1978 Hamilton Spectator Trophy for 1st place during the regular season.

The 20 year old Smith beat out 17 year old Wayne Gretzky (182 points) for that year's OMJHL scoring title, winning the Eddie Powers Memorial Trophy as the league’s top scorer, while also winning the Red Tilson Trophy as the OMJHL's most outstanding player and was voted the CHL Player of the Year for the entire Canadian Hockey League / CHL.

Smith was drafted first overall in the 1978 NHL Amateur Draft by the Minnesota North Stars, and would win the 1979 Calder Memorial Trophy as NHL rookie of the year, scoring 30 goals, 44 assists in 80 games.

Smith along with his 2 linemates, Steve Payne & Al MacAdam led the Stars to the Stanley Cup semi-finals in 1980 and the 1981 Stanley Cup finals, losing to the Dynasty New York Islanders.

The North Stars signed Smith to a seven year contract in the summer of 1982 - the longest in team history at the time. Fifteen months later, they traded him to the Montreal Canadiens, as Smith and the Stars new coach did not see eye to eye.

The trade to Montreal was a great moment in Smith's playing career, not only did he get to play with Guy Lafleur and Larry Robinson, but his father could easily drive from Ottawa to see him play.

Smith had a injury plagued 1989-90 season, in which he had his lowest point total (26) in his career to that date, and then Montreal traded Smith back to Minnesota for a draft choice on August 7, 1990.

Smith would play the final 3 years of his career with the North Stars, helping them reach the 1991 Stanley Cup finals, losing to Pittsburgh. Smith announced his retirement just days before his last game in April of 1993 prior to the North Stars move to Dallas Texas.

Smith was named the first General Manager of the NHL Phoenix Coyotes, serving from 1996 to 2000, and guiding the team to a 151-134-39-4 record with four straight playoff appearances. In February of 2001, Wayne Gretzky became the team’s majority owner and relieved Smith of his role.

Smith represented Canada twice at the IIHF World Championships. In 1979 in Moscow, Canada placed fourth. In 1982 in Finland, Canada took home the bronze. In both tournaments, the Soviet Union won gold.

Since 2003, Smith is the majority owner and president of the Halifax Mooseheads of the Quebec Major Junior Hockey League / QMJHL.

The Ontario Hockey League / OHL established the Bobby Smith Trophy, which honours the OHL Scholastic Player of the Year who best combines high standards of play and academic excellence.