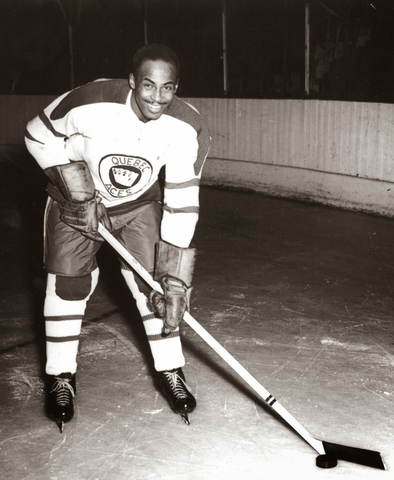 Carnegie was born to Jamaican immigrants Adina James Mitchell and George Nathaniel Carnegie and was the fifth of seven children. He grew up in North York, where he played sports including softball, golf and Hockey. Carnegie began dreaming of playing professional Hockey at around age eight, when he first laced up a pair of skates and took to the ice, playing on the frozen ponds in north Toronto and listening to Foster Hewitt call Hockey games. Hockey was his calling. His older brother Ossie was also an aspiring professional Hockey player.

In 1938, he started playing with the Toronto Young Rangers Junior A team, and following an outstanding junior career joined the Perron Flyers in Northern Quebec.

From 1940 to 1942, Carnegie played with the Timmins Buffalo Ankerites, a team in a mines league that played in mining towns throughout Northern Ontario and Québec. During the 1941 season, the Buffalo Ankerites were the first semi-professional organization to feature an all-Black line, consisting of Carnegie, his brother Ossie, and Vincent Churchill (Manny) McIntyre. Sportswriters and fans referred to the trio as the “Brown Bombers,” “Dusky Speedsters,” and “Dark Destroyers,” but ultimately they became known as “Les Noirs” or the “Black Aces.” Herb (the playmaker) played centre while Ossie (the shooter) and McIntyre (the enforcer) covered the wings. During two seasons with the Ankerites (1940–41 and 1941–42), they helped the club earn two league championships. The Black Aces became one of the most skilled and respected lines in minor Hockey during the 1940s and played together on various teams, including the Sherbrooke Saints.

While playing with the Ankerites, the Carnegie brothers and McIntyre came to the attention of teams based in the Quebec Provincial Hockey League (QPHL). In 1944, Carnegie began his QPHL career as a member of the famous Shawinigan Cataractes, but only played with them for one season. The following season, Carnegie joined the Sherbrooke Randies, which was renamed Sherbrooke St. Francis (or Saints) in 1946. During the 1947–48 season with Sherbrooke, Carnegie scored an astounding 127 points (48 goals, 79 assists) in 56 games — this achievement brought him to the attention of NHL talent scouts.

In 1948, the New York Rangers invited Carnegie to their training camp, offering him a chance to qualify for their official NHL roster. However, Carnegie was not selected for their NHL team and was recommended to the minor leagues. The Rangers were interested in holding the rights to him, but according to Carnegie, he would have made less money in the minor leagues than he could earn in Québec. He turned down the Rangers' offer and returned to Sherbrooke for the 1948–49 season — by then the Sherbrooke organization had joined the Quebec Senior Hockey League (QSHL). This was the last season the Black Aces played together; they scored a combined 142 points in 63 games, helping Sherbrooke to a second-place finish in the league standings.

For the 1949–50 season, Carnegie put on a new jersey and transferred to the Quebec Aces (based in Québec City), under coach George “Punch” Imlach. Carnegie played with the team for four seasons. During the 1950–51 season with the Aces, Carnegie played alongside Jean Béliveau, the future Montreal Canadiens star and Hockey Hall of Fame inductee.

Carnegie spent his final season with the Owen Sound Mercurys of the Ontario Hockey Association Senior A league (OHASr), retiring from hockey in 1954 at age 34.

In 1955, Carnegie founded what, according to his family, was the first registered Hockey school in Canada at North York’s Mitchell Field - The Future Aces Hockey School

One year later, Carnegie wrote the Future Aces philosophy, a creed extolling the virtues of self-esteem and sportsmanship that is now used in character building exercises in hundreds of schools. It is the basis of the Herbert H. Carnegie Future Aces Foundation, an organization he co-founded with wife Audrey and daughter Bernice.

His work with the Future Aces school finally brought Carnegie into the mainstream in the early 1990s when they were featured in a pair of special issues of The Amazing Spiderman, titled "Skating on Thin Ice!"and "Double Trouble." where they helped bring down the villain Electro and his Hockey puck/drug smuggling ring.

Jean Beliveau Quotes :
"I tried to duplicate what Herbie was doing at faceoffs and making passes onto the blade, not behind the wingman."

“I witnessed Herb’s brilliance. There was no question that the years I spent with
him still evoke some of my best Hockey memories. Herbie was a super Hockey
player, a beautiful style, a beautiful skater, a great playmaker. Those days
the younger ones learned from the older ones, I learned from Herbie.”

Herbert H. Carnegie was named to the Order of Ontario in 1996.

Herbert H. Carnegie was inducted into Canada's Sports Hall of Fame in 2001

Herbert H. Carnegie was named to the Order of Canada in 2003.

Herbert H. Carnegie was inducted into the Ontario Sports Hall of Fame in 2014.

He was also the recipient of numerous community and honorary awards. He received the Queen’s Silver Jubilee Medal in 1977, the Golden Jubilee Medal in 2002 and the Diamond Jubilee Medal in 2012 (posthumous). Carnegie also received the Ontario Medal for Good Citizenship in 1988, the City of North York Volunteer of the Year (1989), Volunteer Award of Distinction (1997), Apple Creek SDA Role Model Award (2009), Planet Africa Lifetime Achievement Award (2007), as well as many other community service and lifetime achievement recognitions.

The Investors Group instituted their own Herbert H. Carnegie Award in 2003, which is awarded to employees who demonstrate professional excellence and devotion to their community.

In June 2006, Carnegie received an Honorary Doctor of Laws degree from York University.

A Public School in the “Maple” district of Toronto is named in his honour.