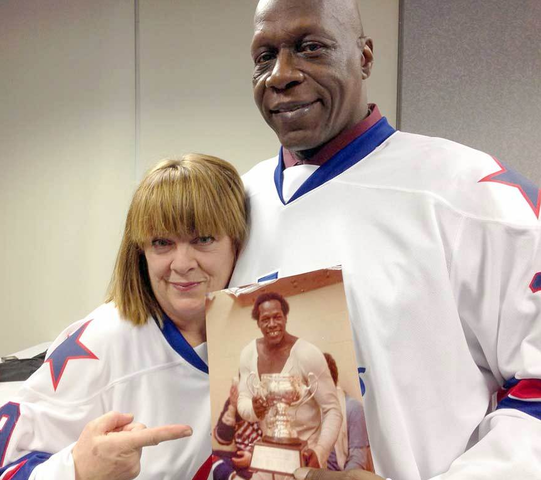 This photo is of Val James and his long time wife Ina who is pointing to the 1983 AHL Calder Cup, in which Val James would score the Championship goal for the Rochester Americans.

James was born in Ocala, Florida and raised on Long Island, New York. It was on Long Island that James began skating and playing ice Hockey in Commack where his father was employed as the manager of an ice rink.

James didn’t lace up skates until he was 13. Yet he became the first U.S. born African American to reach the NHL in 1982 when the Buffalo Sabres called him up for seven games.

James was also the first native-born Floridian to play in the NHL.

James played his early junior Hockey for the Quebec Remparts of the Quebec Major Junior Hockey League, where he scored 30 goals and 65 points over 2 seasons (140 games) from 1975 to 1977.

James was then selected by the Detroit Red Wings in the 16th round (No. 184) of the 1977 NHL Draft, but never played in any regulation games for the Red Wings.

James then played for the Erie Blades of the Eastern Hockey League for 3 seasons, and would score 29 goals and 57 points, but would become know for his hip checks, physical play and was a revered and feared fighter amassing 408 penalty minutes from 1978 to 1981. James made his first appearance in a Rochester Americans jersey in 1981 after a brief call-up for 3 games, and 12 penalty minutes.

James then signed with the Buffalo Sabres on July 22, 1981, and would become a star and fan favourite with their AHL team the Rochester Americans for four seasons, and would score 10 goals and 24 points from 1981 to 1985, with 484 penalty minutes, and now known in Hockey as an enforcer.

Val James made his NHL debut for the Buffalo Sabres during the 1981-82 NHL season, playing ten games, including 3 playoff games (0 points and 16 penalty minutes).

James played for the St. Catherine Saints in 1985-86 for 93 games, including 13 playoff games (5 points and 215 penalty minutes). The Saints would then move to Newmarket, Ontario for the start of the 1986-87 AHL season and become the Newmarket Saints. James would play a further 74 games scoring 4 goals and 7 points, with 71 penalty minutes. During this time the Saints were the farm team for the Toronto Maple Leafs, and James would be called up for 4 games in a Maple Leafs jersey (0 points and 14 penalty minutes).

After retiring James moved to Niagara Falls, Ontario where he did building maintenance and taught in the local Hockey school. During this time James quietly reflected on his life as a Pro hockey player and the abuse he suffered during this time from racial slurs and insults "I couldn't watch Hockey for about 10 years," he says. "And when I did come back to watching hockey I could only take 15 minutes of it, and then I'd have to turn it off. Because all the things would start again."

Val James decided to write a book about his time playing Ice Hockey and brought in John Gallagher to co-write Black Ice : The Val James Story. It took decades of soul searching to talk about it, James says.

James says writing his book has been therapeutic, and its message is simple.

"I don't have any animosity towards the things that have happened, I just know that they happened," he says. "And perhaps, through the book and the message that's coming through, we can change a few minds and have people look at people as individuals instead of by the color of their skin."

"When he was the only black man — not only on the ice, but in the entire arena — the strength and the courage that he had, it's remarkable," he says. "I think that's the lasting legacy of his story."

"Imagine every three seconds being called something, whether you're of any ethnic nationality, or even a woman," James said. "Every three seconds for 20 minutes a period, which would equate to about two and a half hours in real time, and multiply that by 40, which signifies 40 games of the year, and 10 years, the span that I played.

Once at a tournament in Ann Arbor, Mich., a man repeatedly called James racial names during warm-ups, mental abuse that put his hockey career on the brink. James wanted to quit. His mother wanted him to quit. His father left the decision up to him, and after deep thought, James decided to keep playing.

"It was something that I wanted," James said. "After getting a taste of the Hockey bug, it bites you hard and you can't let go. I had to prove to myself that I was strong enough to take all of this, and I did. There were a few bumps in the road where maybe I let my emotions get the best of me, but I was able to have enough discipline to take hold of and control them when it did happen. For me to go up in the stands and do something to the fans that means I'm out of control."

"But should you lose a couple of those, it's going to be a long road to get to where you're going. I hope everyone understands that, and that's what I hope they get out of this book, because that's what this book represents."