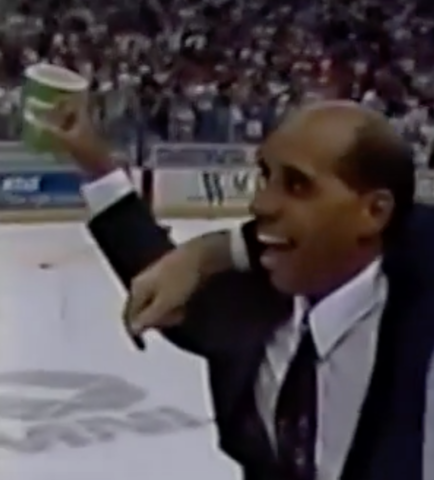 John Paris Jr. - First African-American or African-Canadian coach to win a major award, he coached the International Hockey League / IHL's Atlanta Knights in 1993-94 to the IHL Turner Cup Championship, winning the championship on May 25, 1994.

John Paris Jr. first became a head coach in 1989-90 with the Granby Bisons in the Quebec Major Junior Hockey League / QMJHL. Over parts of three seasons with the Bisons, Paris Jr. amassed a record of 50-57-9. He moved on to coach the St. Jean Lynx in 1992-93 in the QMJHL as well, putting up a 35-32-5 record. This was good enough for the management of the IHL's Atlanta Knights to notice him and hand him the coaching job to the Atlanta Fire Ants roller Hockey team in the upstart Roller Hockey International league.

After one season in Atlanta, the Fire Ants were relocated to Oklahoma City, and Paris was given an assistant coaching job with the IHL's Atlanta Knights ice Hockey team. Coaching alongside former Pittsburgh Penguins head coach Gene Ubriaco gave Paris good insight on how to run a Hockey team professionally.

The Knights' management decided that the best man to take over the team for the rest of the season was John Paris Jr. In the remaining 17 games, Paris coached the Knights to a 9-5-3 record, ending the season as the top team in the Midwest Division with a 45-22-14 record. The Knights swept the Milwaukee Admirals in Round One, and then swept the San Diego Gulls in Round Two to advance to the Turner Cup Final.

The Fort Wayne Komets were the Knights' opponents in the championship final. It took the Knights six games to eliminate the Komets, winning game six 3 to 1 on home ice, and Atlanta's 1st professional Hockey championship.

John Paris Jr. was later hired by the expansion Macon Whoopee of the Central Hockey League / CHL to be their first head coach and general manager in 1996.

John Paris Jr. was inducted into the Nova Scotia Sports Hall of Fame in 2005.

John Paris Jr. was inducted into the Canadian Black Hall of Fame in 2006.