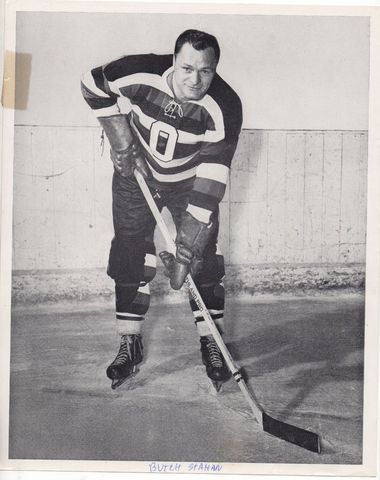 Stahan played junior Hockey for the Portage Terriers and Brandon Wheat Kings from 1934 to 1938. He played for the Allan Cup-winning Kirkland Lake Blue Devils in 1939-40 and then joined the senior Quebec Aces. Stahan won another Allan Cup with the Aces in 1944.

While playing with the Montreal Royals in 1944-45 Stahan was called up by the Montreal Canadiens for three playoff games, scoring an assist.

After the Senators folded Stahan joined the Toledo Mercurys for three seasons and retired in 1957.

Tenure with one team for a player at this level was seldom longer than three of four years. That is except for Frank “Butch” Stahan who played for the Ottawa Senators under Tommy Gorman.

Butch Stahan was simultaneously a hockey player and a caricature of a hockey player. Butch had a hockey pedigree with origins in western Canada but he clearly was more caricature than player. What Gorman liked about “Butch” was that his chin protruded six inches beyond his nose. Butch’s chin was a promoter’s dream; Gorman’s dream. Jay Leno’s chin was lower minor league compared to Butch’s.

Gorman set out to build an aura around Butch and his chin. He had special shin pads designed so that they mimicked an isosceles triangle; eighteen inches across the top and the equal sides converging at a point at the ankle. His shoulder pads were bulky and forty-eight inches from one side to the other. When all of this armour was covered by his sweater and stockings he might best have been described as a behemoth, brutish and foreboding. Actually he was none of that; he was a gentle, courteous man. But his chin determined the role he was to play for the Senators for nine years, all of it dictated by Tommy Gorman.