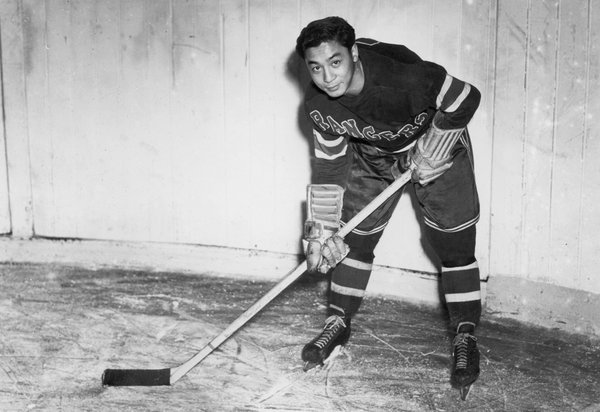 Lawrence Kwong (born Eng Kai Geong 吳啟光) - Born June 17, 1923 in Vernon, British Columbia - Died March 15, 2018 in Calgary, Alberta was a Canadian professional ice Hockey right winger.
Kwong was the first Chinese Canadian and the first person of Asian ancestry to play in the National Hockey League / NHL, and the first player to break Hockey's color barrier, as he was of Cantonese extraction.
He was also the first NHL player from Vernon, British Columbia, and the Okanagan region.

Born to immigrant grocer parents, Kwong played as a forward and was called the "China Clipper" and "King Kwong".

Kwong powered the Vernon Hydrophones to the midget Hockey championship of BC in 1939 and then to the provincial juvenile title in 1941. As an 18-year-old, Kwong jumped the junior ranks to play senior Hockey for the Trail Smoke Eaters. In Trail, he was denied a job working with his teammates at the smelter because of his Chinese heritage, but did get a job at a local hotel as a bellhop.

Kwong then went to Vancouver Island, moving to Nanaimo to as a labourer and build minesweepers by day in the docks and play Hockey at night for the Pacific Coast Hockey League Nanaimo Clippers.

The Pacific Coast Senior Hockey Association Vancouver St. Regis Hockey team took notice of Kwong, and made him a offer to move to Vancouver for the 1943-44 season. Kwong had a solid season with the St. Regis team, who were coached by Cyclone Taylor, but the team got suspended just as the playoffs were starting, as they had played a pro (Sweeney Schriner) on their team for a few games, and a complaint was launched by another team.

By this time the Canadian Government was drafting Chinese-Canadians to serve in the war, but Kwong got recommended by Schriner to play in the Central Alberta Garrison Hockey League / CAGHL, so Kwong was sent to Red Deer, Alberta for basic army training, and arrived in time to play a couple of games for the Red Deer Army Wheelers along side "Sugar" Jim Henry and Mac Colville who were on the Wheelers. The enemy was neither Nazi Germany nor Imperial Japan, but rather a navy Hockey team in Calgary and an air force Hockey team in Edmonton in the CAGHL.

During the next season, Kwong played for the Wetaskiwin Army Team

After World War II Kwong returned to Trail and won the provincial senior Hockey championship with the Smoke Eaters in 1946. In that BC Final series against the New Westminster Royals, Kwong led the Smokies in scoring (tied with Mike Buckna) and scored the Savage Cup-winning goal. Later that year, Lester Patrick scouted Kwong on Cyclone Taylor's advise and was impressed, signing him for the New York Rovers, a farm team of the New York Rangers. Kwong scored a goal in his debut for the Rovers against the Boston Olympics in Boston on October 27, 1946.

At Madison Square Garden on November 17, 1946, Shavey Lee, the unofficial mayor of Chinatown, and two showgirls from the China Doll nightclub honored a blushing Kwong at center ice, and presented Kwong with the Keys to New York's Chinatown.

Kwong went on to have a long career in senior leagues in Canada and the United States. Coached by Toe Blake, Kwong was named as an assistant captain of the Valleyfield Braves.

In 1951 Kwong won the Byng of Vimy Trophy as the Most Valuable Player of the QSHL. That year, he led the Valleyfield Braves to the league championship and then to the Alexander Cup, the Canadian major senior title.

In the following QSHL season (1951–52), Kwong's 38 goals were topped only by Jean Béliveau's 45 tallies. In his nine-year tenure in the Quebec League, competing against future NHL All-Stars such as Béliveau, Jacques Plante, Dickie Moore, Gerry McNeil and Jean-Guy Talbot, Kwong averaged better than a point per game.

Kwong also spent one season with the Nottingham Panthers in Britain, scoring 55 goals in 55 games, before moving to Switzerland where he led HC Ambrì-Piotta in scoring as player-coach. With this coaching assignment, he became the first person of Chinese descent to coach a professional Hockey team. He later coached HC Lugano and HC Lausanne.

In 2009 Kwong was honoured by the Vernon Vipers of the British Columbia Hockey League in a pre-game ceremony, also receiving the Heritage Award from the Society of North American Historians and Researchers (SONAHR). That year he was also saluted by the Calgary Flames at the Saddledome.

Kwong's story is featured in the documentary film Lost Years: A People's Struggle for Justice (2011), written, directed and produced by Kenda Gee and Tom Radford.

On November 23, 2011, Kwong was inducted into the Okanagan Sports Hall of Fame in the Athlete category.

On September 19, 2013, Kwong became an honoured member of the B.C. Sports Hall of Fame.

In 2014, The Shift: The Story of the China Clipper, a documentary by Chester Sit, Wes Miron and Tracy Nagai, had its theatrical premiere in Vernon, BC.

King Kwong: Larry Kwong, the China Clipper who Broke the NHL Colour Barrier, a biography by Paula Johanson, was published in 2015.

Larry Kwong was enshrined in the Alberta Hockey Hall of Fame on July 23, 2016.