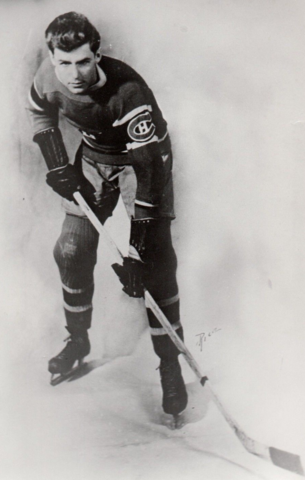 Crutchfield played three seasons with the Shawinigan Cataracts then moved on to McGill University, where he played for three seasons. With McGill, Crutchfield served as the team's captain and was also part of a feared offensive juggernaut know as "The Four Horsemen" comprised of Crutchfield, Ken Farmer, Hugh Farquharson and the aptly named Jack McGill. Crutchfield liked to create room for himself and his teammates by taking liberties on other players, even with his stick. He did what it took to win, and win he did leading the Redmen to three Queen’s Cup intercollegiate titles (1931, 1933, 1934), two Quebec Senior Hockey League championships (1931, 1934) and one Quebec Amateur Hockey Association provincial championship (1931).

In 1934-35, after his third and final season with McGill, Crutchfield moved on to the National Hockey League. His rights were owned by the Montreal Maroons, but Crutchfield was traded to the Canadiens by the Montreal Maroons on Oct. 3, 1934, along with Jack McGill in exchange for Lionel Conacher and the rights to Herb Cain. Crutchfield played 43 games, with two of them coming in the playoffs for Les Habitants and scored 5 goals and 5 assists, and 1 playoff assist.

Crutchfield was a tough player, and known for his dirty tricks on the ice, and was involved in a terrible moment that came in the playoffs of 1935. With the Les Habitants facing the New York Rangers.
Here's how Here's how Montreal Gazette correspondent Marc T. McNeill described the stick-swinging incident between Crutchfield and Bill Cook and the ensuing brawl in an article in the Gazette the following day:

"It was a hectic, pulsating melee in the second session that began with Crutchfield and Cook hammering on each other's heads and a few seconds later, as Bill went down to the ice with blood streaming from the long gash in his head, the affair broke into a free-for-all battle between nearly all the players of both teams who came swarming off their benches like disturbed hornets from a hive.
Police swung over the boards to aid the referees quell the flare-up, and Col. Hammond, Lester Patrick and Leo Dandurand were all three on the ice before the combatants were finally dispersed.
Bill Cock had stuck a knee into Crutchfield, and the big Canadien had turned around abruptly and clipped Cook in the face with the blade of his stick, either in retaliation or by accident. Cook complained to the referee but Ag Smith had already blown the whistle - to motion Cook to the penalty box. Apparently Smith had seen the knee, but missed the Crutchfield manoeuvre.
Cook then took matters into his own hands and, with cold deliberation, as he skated past Crutchfield slapped Nels in the face with the blade of his stick, an exact
duplication of what Crutchfield had done to him.
Crutchfield staggered back, surprised. He hesitated a moment, then swung up his stick and brought it down on Cook's head. Bill went down with Nels on top of him pummelling. Then the other players came storming in.
Harold Starr and Wilf Crude flung punches in an individual duel; and slim Wilfie held his own with Starr, recognized as a bad man in a scrap. Art Somers and Jack McGill flopped against the boards, struggling. A half-dozen more players were coupled off in private scraps.
Eventually, the heaving, belting players were quieted. Then the penalties were awarded: minors to both Crutchfield and Cook for stick-swinging, with a match penalty tacked on to Crutchfield, with no replacement for 20 minutes plus the original two for cutting down the Ranger ace. A five-minute major was added to Cook's minor."

Crutchfield tragically would not play Hockey again following his first campaign. Injuries he sustained in an automobile accident in September of 1935 would keep him from playing again.

The Canadiens held a benefit game for him, raising some $7,000 in the years of the Great Depression.

Nels Crutchfield was elected to the McGill University Sports Hall of Fame on January 10th 2002.