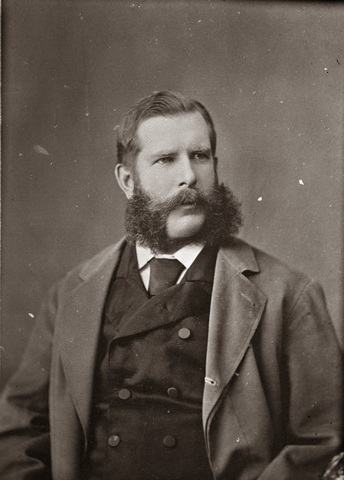 John Sweetland (Born August 15, 1835 in Kingston, Ontario, Canada - Died May 5, 1907 in Ottawa, Ontario, Canada) was a Physician, Sheriff, President of many organizations and 1st co-trustee of the Dominion Hockey Challenge Cup / The Stanley Cup.

Sweetland is a descendant of the Sweetlands of Exeter, Devonshire, England.

Sweetland was the son of Jane and Simon Norris Sweetland.

Sweetland was married twice, his first was Isabella, daughter of Sheriff Dickson of Kingston, Ontario. She died in 1872, leaving two daughters, Elizabeth J. and Selina Florence. His second wife was Mrs. Caroline Blasdell Sparks, relict of the late Nicholas Sparks, son of Nicholas Sparks, the founder of Ottawa, their union taking place in August, 1874. They had one child, John Blasdell.

Sweetland graduated from Queen’s College / University in 1858 and practised medicine in Pakenham, County of Lanark, Ontario, where he was also the coroner for Lanark and Renfrew counties.

In 1865, he moved his practice to Ottawa, and was Surgeon of the Carleton County Jail (Gaol) for several years, he also served on the medical staff of the County of Carleton Protestant General Hospital, and was Consulting Physician of that institution. He was likewise, for a long time, Surgeon of Unity Protestant Benefit Society; for a shorter period Surgeon of the Foresters, and was also Surgeon of the independent order of Odd Fellows.

Sweetland was the founder and first president of the Lady Stanley Institute for Trained Nurses established in 1890.

Sweetland was one of the original members of the commission, and appointed commissioner overseeing the construction of Ottawa’s original water distribution system in the early 1870s.

Sweetland was appointed sheriff of Carleton County (now Ottawa) in 1880.

Sweetland was a Director of the 1st and 2nd Mutual Building Societies of Ottawa.

Sweetland was a member of the Masonic fraternity, and for four years was Master of Doric Lodge No. 58, Canadian Register.

Sweetland was a member of Christ Episcopal Church; a man of the purest Christian character, and in hearty sympathy with the reformatory movements, in a moral sense, of the age. He is a man of very noble impulses, and untiring in his efforts to aid in promoting the best interests of his fellow beings.

Sweetland and Ross were appointed as the trustees of the Stanley Cup in 1892 by Canada's then Governor General Lord Stanley.

Sweetland remained a trustee of the Stanley Cup until just before his death in 1907, being replaced by William A. Foran.

Sweetland and Ross first presented the Stanley Cup on May 15, 1893 to the Montreal Amateur Athletic Association on behalf of the affiliated Montreal Hockey Club, the champions of the Amateur Hockey Association of Canada (AHAC).

This photo of Dr. John Sweetland was taken in November 1879.