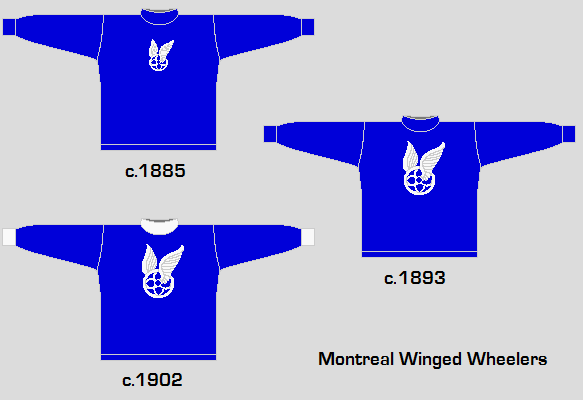 Winged Jerseys - Montreal AAA - Montreal Amateur Athletic Association - 1885 - 1893 - 1902 - Montreal Amateur Athletic Association is Canada's oldest athletic association, located in Montreal, Quebec, Canada. It was renamed as the Club Sportif MAA or just MAA (Montreal MAA) in 1999 after a brush with bankruptcy, but is still widely known as the MAAA. In the late 19th and early 20th centuries, the MAA was one of the most important sporting institutions in Canada, and North America, with affiliated teams winning ice hockey's Stanley Cup and Canadian football's Grey Cup and cricket - The Montreal AAA / Montreal Hockey Club (MHC) was an ice hockey team that played in the Amateur Hockey Association of Canada (AHAC) 1886-1898, the Canadian Amateur Hockey League 1898–1905 and the Eastern Canada Amateur Hockey Association 1905–1908, the Inter-Provincial Amateur Hockey Union from 1908 afterward. The team won the AHAC title from 1888 until 1894, and won the Canadian Amateur Hockey League title in 1902. It was the first club to be presented with the Stanley Cup, in 1893. They won again in 1894, March 1902 and February 1903