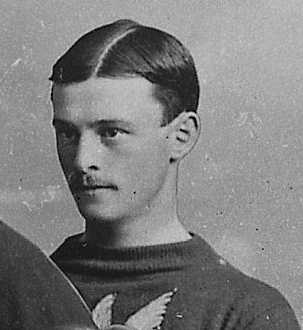 William "Billy" McKenzie Barlow (Born 1871 in Montreal – Died February 14, 1963 in the Notre-Dame-de-Grâce neighbourhood in Montreal) was a Canadian amateur ice Hockey player in the late 19th century. He is interred in Mount Royal Cemetery in Montreal.

Barlow played for the Montreal Hockey Club / Montreal AAA, champions of the Amateur Hockey Association of Canada (AHAC) from 1888 to 1897, and first winners of the Stanley Cup in 1893.

Barlow received his education at the Belmont School in Montreal. As well as ice Hockey, Barlow played lacrosse for the Montreal AAA.

Barlow is credited with scoring the 1st Stanley Cup-winning goal in history on March 23, during the 1st playoff championship match of 1894 - A one game challenge from the Ottawa Capitals. The game was played at the Victoria Rink in Montreal.

Barlow was a small but brilliant forward (Rover) player, who played a very speedy game, and was a excellent scorer. For many years he held the reputation of being the "Prince of Forwards" in the Dominion of Canada.

As a member of the first Stanley Cup-winning squad in 1893, and for being the champions of the Amateur Hockey Association of Canada for seven straight years, the Montreal Amateur Athletic Association / Montreal AAA presented Barlow and his eight teammates, a souvenir championship ring to commemorate the championships.

Barlow's ring is now on display in the Hockey Hall of Fame in Toronto, Ontario after having been donated by Barlow's daughter, Ms Doris Gertrude Cox.