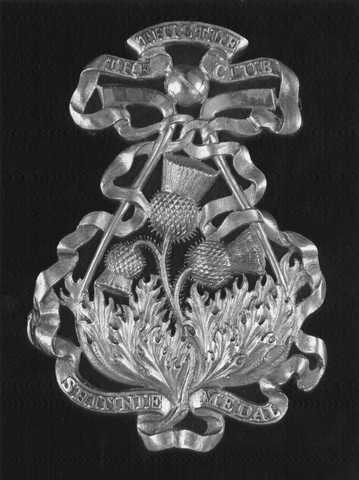 1993 is the Centenary of The Shinty Camanachd and this medal is thought to have been presented at the inauguaral meeting in 1893.

Another report is said that this Shinnie medal is from about 1836.

The earliest written reference to shinty or "schynnie" is in 1589, in the Kirk Session Records of Glasgow.

The term "shinty" itself requires some explanation. Iomain, or more latterly camanachd, were the Gaelic terms, meaning driving. This is "An English View of Shinty" in 1893, the year the game took on the first vestiges of its organized form, with the establishment of the ruling body, the Camanachd Association:

Camanachd is not an orchid; nor is it a new biological eccentricity, nor the latest freak of pathological nomenclature. It is a recreation. In Scotland there are three games which can best claim to be native to the soil - golf, curling and shinty and the greatest of these is shinty, whereof the Gaelic name is camanachd.

"Shinty"(or its variants shindy, shinnie, shindig etc), however, has proved much more contentious, and the general view is that it is derived from the Gaelic sinteag - a "leap, bound". Shinnie, in fact is held to be the older of the two (around 1600) with shintie replacing it some 100 years later - according to the sport's first real historian, Father Ninian MacDonald, OSB: