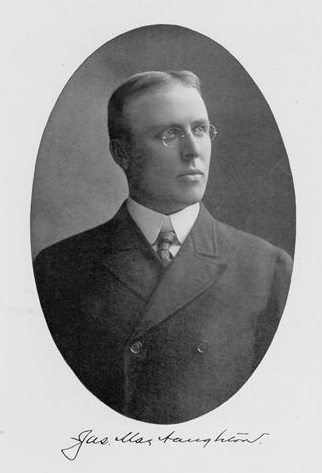 MacNaughton, an avid supporter of amateur ice Hockey, in 1913 authorized the President of the American Hockey Association to purchase a cup to be awarded to the Associations Champion at the end of the season.

The MacNaughton Cup remained with the American Hockey Association until 1932. From 1933 to 1950, the Cup was fought for by semi-pro and intermediate Hockey aggregations in Michigan's Copper Country.

In 1951, the MacNaughton Cup was donated by Calumet and Hecla, Inc., through the generosity of Mr. and Mrs. Endicott R. Lovell, to the newly-founded Midwest Collegiate Hockey League (MCHL) a forerunner of the WCHA. Mr. Lovell, son-in-law of James MacNaughton and President of the company at that time was also an avid supporter of amateur ice Hockey.

In 1953 the MCHL became the Western Intercollegiate Hockey League (WIHL). The MacNaughton Cup remained a part of the WIHL until the league was disbanded in March of 1958. There was no league play for the 1958-59 season (though most of the WIHL teams played home-and-away schedules). In 1959-60, the seven original MCHL/WIHL teams resumed formal competition under the new name of the Western Collegiate Hockey Association.

James MacNaughton first became affiliated with the Calumet and Hecla Mining Company as a young man, working in the mine from 1879 to 1883.

After he was eleven years of age he worked during his summer vacations as a water-boy at the Calumet & Hecla coal docks, receiving one dollar per day for his services. At the age of sixteen he left school, and became a switch-tender on the railroad operated by the Calumet & Hecla Company. In about a year thereafter he began operating a stationary engine on the gravity road at the stamp mills of the same company, receiving for his services two dollars
per day. The railroad at that time was not built down to the stamp mills, and a gravity road was used to lower the trains of loaded cars down to the mills.

When nineteen years of age it was decided to send him to Oberlin College, at Oberlin, Ohio, where he studied for one year. In the fall of 1884 he entered the University of Michigan, taking a course in engineering, until June, 1886. He then accepted a position in the mining engineer's office of the Calumet & Hecla Mining Co., where he did surveying and draughting until February, 1889, when he resigned to accept the position of mining engineer at the Chapin mine at Iron Mountain, Mich. In May, 1890, he was made Assistant Superintendent, and in March, 1892, was given the position he now occupies, that of General Manager..

Mr. MacNaughton has been a supervisor of Dickinson county ever since that county was organized, and was for one year chairman of the Board of Supervisors. He was appointed in 1895 by Governor Rich as a member of the Board of Control of the Upper Peninsula Prison, at Marquette, Mich., and held the office until 1899. He is also the president of the Board of Public Works at Iron Mountain, and was a delegate to the Republican convention held in St. Louis in 1896. At the State Republican convention held in Detroit in April, 1900, he was nominated as a presidential elector.

In 1901, MacNaughton returned to the Calumet and Hecla Mining Company as superintendent. He would become Vice-President and General manager. In 1926 he was elected President of the company.