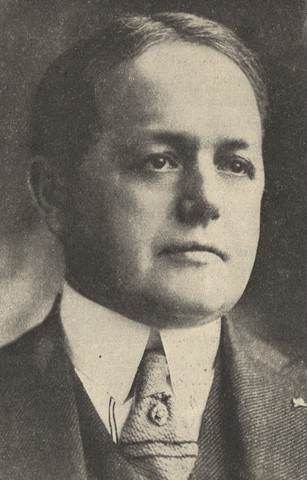 Haddock moved to the United States in 1887 with his family. In 1889, as a youth, he moved to Pittsburgh where he entered the the newspaper business. Haddock would spend 28 years working for the Pittsburgh Press.

Haddock was vice-chairman of the International Skating and Hockey Union / ISHU, which was responsible for sending United States Hockey players to Antwerp, Belgium, for the 1920 Olympic games. Haddock unveiled plans to fund the team’s trip to Europe. Approximately $15,000 was needed and the exhibition games would be the source of the funds. The intent was to play two series of two games each against “worthy” opponents at Duquesne Garden. Games would be played in March, 1920. All money beyond the guarantee paid to the visitors and “bare overhead expenses” would go to the Olympic team. Haddock urged local fans to think of admission prices not as a charge, “but as a contribution to help send our boys away. ”

Haddock would be elected the 1st president of the United States Amateur Hockey Association on October 25, 1920.

During the war and for the season of 1919-20 the International Skating Union was in charge all of hockey in the United States and had a working agreement with the Amateur Athletic Union / AAU and the Canadian Amateur Hockey Association / CAHA. The United States Amateur Hockey Association was formed on October 25, 1920 at a meeting held in Philadelphia. The ISU passed a resolution, with the approval of the AAU, to turn over control of the sport to the USAHA. Thus the USAHA was affiliated with both the AAU and the CAHA.

At the 1922 Ligue Internationale de Hockey sur Glace / LIHG congress in St. Moritz, Switzerland, Haddock was said to have won a coin toss with Canadian William A. Hewitt to determine who would be second vice-president of the International Ice Hockey Federation. Haddock would hold this position until 1925 when Peter Müller from Switzerland was elected to this position.

Haddock would be appointed USA ice Hockey team manager & coach for the 1924 Winter Olympics in Chamonix, France. The team would only lose 1 game - to Canada, and be awarded the Olympic Silver Medal.

Haddock was chairman of the American Olympic Hockey Committee in 1928. The team he wanted to send to the Winter Olympics from Augsburg College, was not approved by General Douglas MacArthur, chairman of the American Olympic Committee, stating the team, led by the five Hanson brothers, “was not representative of American Hockey.” This is the only time the United States has not competed in Olympic ice Hockey.

Haddock was also President of the National Amateur Baseball Federation in 1919-20 season.

Haddock was also President of the Greater Pittsburgh Baseball Commission.

Haddock was also President of the Allegheny Mountain Association of the Amateur Athletic Union.

Haddock was also elected Sheriff of Allegheny County in November 1917, for a term of 4 years.

Haddock served in the United States Army during the Spanish-American War, enlisting in April, 1898, as a private in Company C, Tenth Regiment, Pennsylvania Volunteers (the "Fighting Tenth"), serving with his regiment in the Philippine Islands. He was honorably discharged rom the military in August, 1899, and is a member of the McKinley Post, Veterans of Foreign Wars, and of Merrill Allen Camp, United Spanish War Veterans.

You guys are pretty spot on about my Great Grandpa. We still have the original photos from the container ship the US Hockey Olympic team took to France. One day we might consider giving the things we have to a museum or something. Rumor has it General McArthur was not happy with my great Gramps. Apparently McArthur had a team of his own, but the Haddock's denied his request to replace the team which had already been selected. My Dad knows the story better than I.