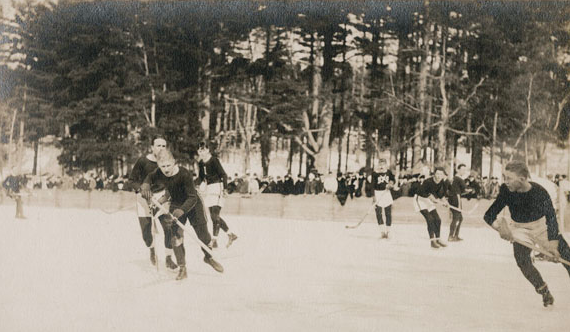 This photograph shows the St. Paul’s School hockey team playing against Dartmouth on the ice on Lower School Pond. Based on the date on the album it records the game played against the Dartmouth Varsity team that took place on Washington’s Birthday, February 22, 1916.

On Washington’s Birthday the S. P. S. team played the last scheduled game of its 1916 season, when it met the Dartmouth team on the ice. This final game was by far the most closely contested, as well as the fastest, game of the year, and while the Dartmouth players succeeded in carrying away the laurels of victory, it was not without playing with the utmost of their ability that they did so. The contest was staged on the finest of ice and under perfect weather conditions, which added greatly to the pleasure of the many spectators, and the clan, fast play which prevailed throughout the game was in itself the very symbolism of good hockey.