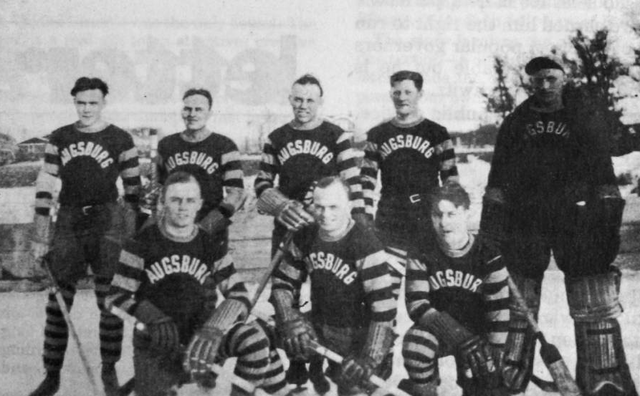 On a cold January day in 1928, Augsburg Hockey coach Si Melby told the eight players on his team that they would be representing the United States in the Winter Olympic Games. Although it was the first year they had played in a conference, the Augsburg team was already recognized as the collegiate power rof the Midwest. The Auggies had gone undefeated in 1927, winning an unofficial state championship. The 1928 team was also unbeaten, and its reputation as a powerhouse spread. Fans nicknamed the squad the "Hansons of Augsburg," for five of the eight players were brothers: Louis, Joe, Julius, Emil, and Oscar Hanson. The other players were Merril Mclnerny, Pat Larson, and goalie Wallace "Moose" Swanson. The Hanson brothers came to Augsburg from the distant Canadian town of Camrose, Alberta.

William S. Haddock of Pittsburgh, chairman of the U.S. Olympic Hockey Committee, selected Augsburg as the American team to travel to St. Moritz, Switzerland to compete in the 1928 Winter Olympic games. There was one stipulation: Augsburg would have to pay one-half of the trip's expenses. Augsburg quickly prepared for the trip. Passports were secured, and transportation arrangements made. The team would travel to New York by train and warm up for the Olympics by playing either Harvard or Yale at Madison Square Gardens. On January 25 the Auggies would set sail for Europe.

Nick Kahler was selected to coach the players during their trip. Kahler, assistant manager of the Minneapolis arena, had eight years earlier become the first American ever selected to play for an Olympic team. His first duty as coach was to find three additional players; Olympic requirements stated that a team must have at least 11 players, and Augsburg only had eight. Si Melby set out to raise the $4,500 his team would need. First National Bank Vice President J. G. Byam was named treasurer of the Hockey fund, and contributions began to pour in. Augsburg Professor S. O. Severson donated $2,500, and the South Side Commercial Club of Minneapolis promised to give considerable financial help. Melby set up a benefit Hockey game at the Minneapolis Arena to raise the rest of the money. The game, set for Saturday, January 21, would feature the Auggies against the Fort Snelling Hockey team. The Minneapolis Figure Skating Club agreed to put on a show before and after the contest. Two prominent area speed skaters consented to a race which was to be held between periods of the game.

This tiny college, with but a few hundred students, suddenly shot into the national limelight. Across the country, newspapers carried stories about the Augsburg hockey team and its gifted quintet of brothers. And then, as quickly as the whole episode had started, it ended. Only three days before the benefit game was scheduled to be played, William Haddock, who had selected the Augsburg team, received a telegram from the secretary of the Olympic committee. It read, "Major General MacArthur (chairman of the Olympic committee) instructs me to inform you that the Hockey team recommended is not regarded as a representative team and certification by the American Olympic committee is disapproved." Haddock was outraged, but there was little he could do.

This is the only time the United States has not competed in Olympic ice Hockey, as there was no team sent to the 1928 Winter Olympic games.