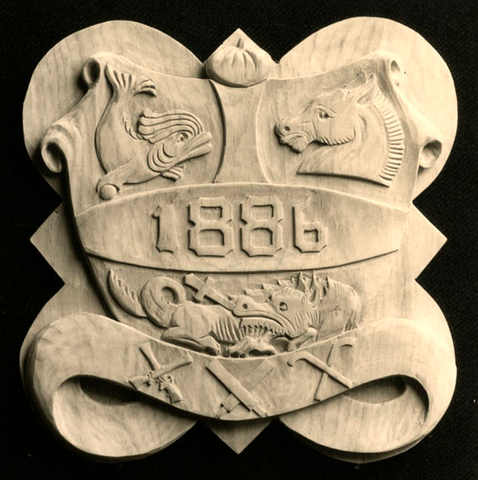 The following description was written by John Gregory Wiggins in the June 6, 1929 edition of the Horae Scholasticae:
Here we have a coat of arms with a pumpkin as crest. This marks a debate by the botanical society as to whether vegetables of fruits were of more value. Vegetables won. In the upper left we have a Shad holding a baseball in its fin, to remind one of the Shattuck pitcher who proved to be the undoing of the Halcyon team in that year. The horse’s head (upper right) is for the new cricket horse bought that year (price $200) to replace Old Joe price ($17). On the lower part of the shield is a dragon transfixed by a St. Paul’s sword, marking a victory over the St. George Cricket Club. On the scroll bellow we have, in place of a motto, XXX recording the 30th anniversary of the School. The first X is crossed blunderbusses for the organization of the gun club, the second crossed cricket bats, for the successful season of that year, the third crossed Hockey sticks, for the reorganization and codifying of the Hockey rules.