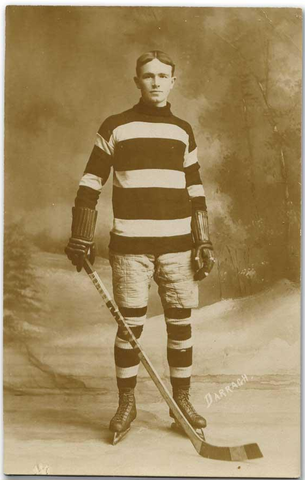 He was a superb skater, a very clever stickhandler and his backhand was particularly lethal, often surprising goalies as that was a largely undeveloped tactic in those days.. As a result, Darragh was a prolific scorer, and over his 13-year pro career he averaged better than a goal every two games.

Darragh joined the Senators in 1910 when the team was part of the National Hockey Association / NHA. Playing that first year on right wing with Marty Walsh and Dubbie Kerr, it was the start of a 12 year career as a member of the Senators.

Darragh also pioneered the "wrong wing" theory, as he was a left handed shot playing on the right side. Jack, one of the cleanest players of his era, had some fine years in the old NHA, scoring 124 goals (and 17 assists, which were rarely recorded) in 132 games.

Darragh won four Stanley Cup championships, all with the Ottawa Senators. His first victory came in 1911 during two challenges. On March 13, as the Senators defeated Galt, which had won the Ontario Professional Hockey League title. The 7-4 score was generous to Galt and Darragh was acknowledged to have been one of the best players on the ice. Three days later the Senators had to defend their championship against the Port Arthur Bearcats after the Bearcats had beaten Prince Albert to earn the right to challenge. This time the Senators swamped Port Arthur 14-4, with Marty Walsh scoring 10 goals and Darragh was anchoring the defense now.

Darragh's Senators made only one other foray for the Cup during the years of the NHA. In March 1915 the Senators and the Canadiens were tied for top spot in the league. The two teams played a two-game, total-goals series that Ottawa won 4-1. But in the best-of-five finals against the Pacific Coast Hockey Association / PCHA champions, the Vancouver Hockey Club "Vancouver Millionaires", the Senators were no match and lost in three lopsided games.

While player movement in the early days of Hockey was frequent - many players swapped teams between the NHA and PCHA - Darragh remained constant to Ottawa.

In the spring of 1920, the Senators were champions of the new NHL and played the Seattle Metropolitans for the Stanley Cup. Although the best-of-five series was supposed to have been played entirely in Ottawa, mild weather forced the final two games to be shifted to the artificial ice of Toronto's Mutual Street Arena. In game one of the series, Darragh scored the game-winning goal in a 3-2 win, and in the fifth and deciding game for the Cup, he scored a hat-trick in a 6-1 victory over the Metropolitans

The next season the Senators again won the Stanley Cup, and again Darragh was the hero. The best-of-five series was played in Vancouver that year and once more the Cup was decided in the fifth game. Darragh scored both Ottawa goals in a 2-1 win and the Senators became the first NHL team to win consecutive Cups. In all, Darragh had seven goals in seven playoff games in 1921.

Darragh became the 1st player to score back-to-back Stanley Cup winners, a first for the NHL, and would not be duplicated for 62 years. Mike Bossy of the New York Islanders in 1982 & 1983 is the only other person to accomplish this.

Darragh took the entire 1921-22 season off, but when he returned to the Senators the next year, it was as though nothing had changed. The Senators beat first the Millionaires and then the Edmonton Eskimos to win their third Stanley Cup in four years.

Darragh also returned for the 1923-24 season, but he was bothered by a serious stomach virus. His season was cut short as it was discovered he was suffering of peritonitis, a disease that would claim his life by the summer 1924. He was just 33 years old.

Jack Darragh was inducted into the Hockey Hall of Fame posthumously in 1963.