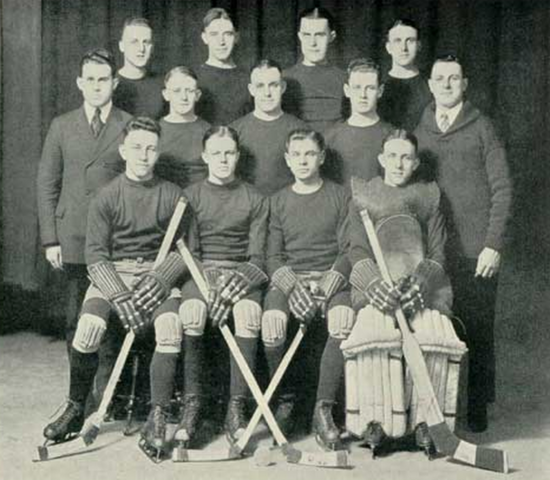 The Gopher hockey team's first game was on Tuesday January 17th against Hamline. Prior to the game two more Gopher players were declared ineligible. One of the ineligible players was the starting guard or goaltender, Dumas. With this development Howard Strange became the starting goaltender, even though he hadn't played the position in four years. This would be the only game Strange would play. The Gophers played hard all game but came up short in a 2-1 loss. At the end of the season, this game was "characterized as the roughest and most furious contest ever staged at the Lexington rink. Fans who saw the game say it was the most thrilling of the season".

With Ed Bergquist now in goal, the Gophers made their first trip to Madison to play the University of Wisconsin Badgers for two games. In a surprise on both sides of the Mississippi, the Gophers won both games 3-0 and 3-1.

Luther Seminary was next for the Gophers. It was a fast paced game that came down to the final three minutes when right defenseman Chet Bros brought the puck from the Gopher end of the ice and passed to left defenseman Addie Wyatt for the score and a 1-0 victory. One interesting fact about this game was that Gopher coach I.D. MacDonald refereed the game when the scheduled referee was unable to officiate.

On February 3rd and 4th the Gophers played the Wisconsin Badgers as part of the St. Paul Winter Carnival. The University band and cheer leaders performed as part of the festivities. In the first game three Gopher players, Lee Bartlett, Addie Wyatt and Beaupre "Bope" Eldridge, each scored four goals in a 12-2 victory. In the second game right wing Bartlett again scored four goals in a 7-0 win. Bartlett, who sometimes wore glasses when he played, was the teams leading scorer at the end of the season.

Gopher manager, Bill Taylor, tried to schedule a game with St. Thomas the following week but the two schools were unable to finalize the details.

The Gophers next opponent was the Michigan College of Mines (later to become Michigan Tech University). The first game in Houghton ended in a 3-3 tie and some controversy. It seems Gopher coach I.D. MacDonald refused to play the overtime period because the Gophers claimed the referee was incompetent. The next night, with a different referee, and no controversy, the Miners won 3-0.

The Gophers hoped for a different outcome a few days later when the Miners came to St. Paul to play on the Gophers home ice. Unfortunately the Miners liked things the way they were and defeated the Gophers 3-2.

The Gophers first season ended the way it began with a game against Hamline. Hamline came into the game on a roll and favored to beat the Gophers. The Gophers were without their Captain and defenseman Chet Bros due to an illness. It appeared the game would go into an extra period until Lee Bartlett scored the winning goal in the third to give the Gophers a 3-2 win.

In Minnesota's first year of Conference play they claimed the Big Ten Championship. They beat Wisconsin four times and Michigan, the only other Conference team, refused to meet the Gophers.