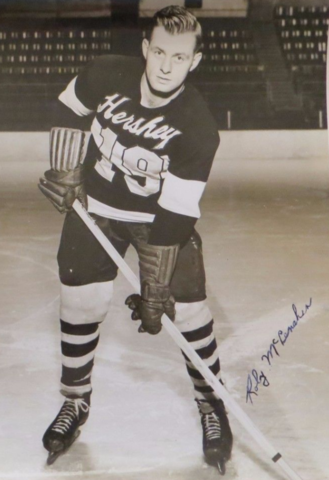 As a teenager, McLenahan played for the Marysville Royals, Devon Northsiders, Fredericton Merchants and the Windsor Mills.

McLenahan joined the Guelph Biltmores in 1940. In 1941-42, playing with the Washington Eagles of the Eastern Hockey League, the 5'7" Mighty Mite scored 19 goals and 44 points from his blueline position. By 1942, Rollie was in Sudbury playing three seasons of senior Hockey with the Tigers.

The Detroit Red Wings signed McLenahan as a free agent in 1945, and in his only NHL action, Mighty Mite played 9 games, scoring 2 goals and 1 assist. McLenahan spent the rest of that season with Indianapolis of the AHL. In fact, between 1945-46 and 1950-51, McLenahan was a stalwart on defense in the AHL. He was chosen to the league's First All-Star Team in 1949-50 while a member of the Hershey Bears. McLenahan played his last AHL season with the Buffalo Bisons in 1950-51.

In 1951-52, Mighty Mite returned home, playing for the Fredericton Capitals and leading the Seniors in scoring his first season back. Sudbury called during the 1952-53 season, and after starting in Fredericton, McLenahan finished the season with the Sudbury Wolves of the Northern Ontario Hockey Association. McLenahan finished his playing career with four seasons (1953-57) with the Cincinnati Mohawks of the IHL, and was named to the league's First All-Star Team three consecutive seasons (1954, 1955 and 1956), leading the IHL in goals with 34 in 1956.

After retiring following the 1956-57 season, Rollie McLenahan moved into coaching, running the AHL Rochester Americans' bench during the 1957-58 season.