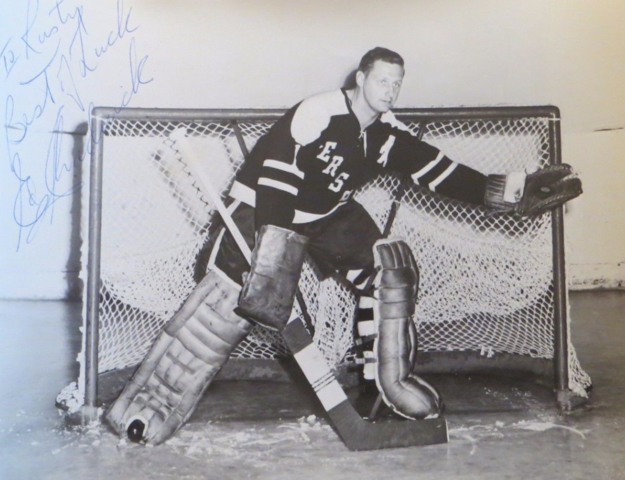 During the 1955-56 season, Chadwick spend the majority of the season with the Winnipeg Warriors of the Western Hockey League, compiling a 39-27-2 record in the regular season and a 16-4 playoff record, helping the Warriors to the Lester Patrick Cup as league champions and Edinburgh Cup as top minor professional team in Canada. During the season, Chadwick got a chance to move to the NHL with the Toronto Maple Leafs when Harry Lumley went down to injury. In five games, Chadwick finished with a 2-0-3 record with the Leafs

He made the most of his opportunity, allowing just three goals while registering two shutouts. The game that stood out most vividly in his mind was the first game against the high-powered Montreal Canadiens. For the following two years, Chadwick was firmly installed as the team's number-one netminder, playing in 70 games in both seasons, the first year under head coach Howie Meeker. Billy Reay coached the team in 1957-58, before Punch Imlach took over the reigns in 1958-59, when Chadwick played in 31 games. Chadwick's 140 consecutive regular season games, is still a Maple Leafs team record.

The bulk of the 1959-60 season, Chadwick was sent to the AHL's Rochester Americans, playing in 67 games and finishing with a 39-24-4 record and then 5-7 in the playoffs. Chadwick would received the Hap Holmes Trophy for fewest goals-against in the AHL and was on the AHL First All-Star Team. Returning to Rochester in the 1960-61 season, Chadwick finished with a 32-35-4 in 71 games.