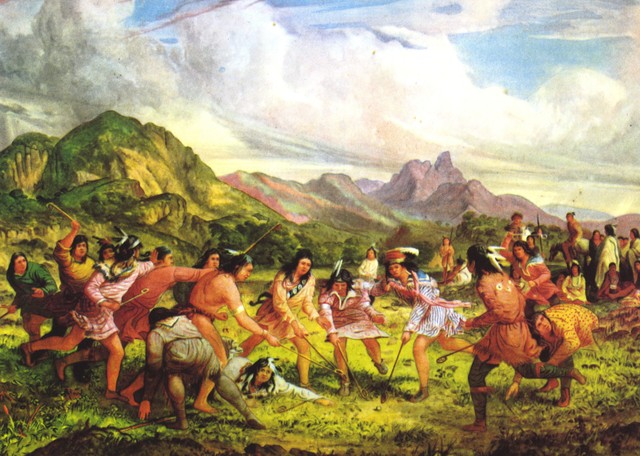 Lacrosse has its origins in a tribal game played by all eastern Woodlands Native Americans and by some Plains Indians tribes in what is now Canada. The game has been modified extensively by European immigrants to create its current form - Modern day lacrosse descends from and resembles games played by various Native American communities. These include games called dehuntshigwa'es in Onondaga ("men hit a rounded object"), da-nah-wah'uwsdi in Eastern Cherokee ("little war"), Tewaarathon in Mohawk language ("little brother of war"), baaga`adowe in Ojibwe ("bump hips") and kabucha in Choctaw - Lacrosse is one of the oldest team sports in North America. There is evidence that a version of lacrosse originated in Mesoamerica or Canada as early as the 17th century. Native American lacrosse was played throughout modern Canada, but was most popular around the Great Lakes, Mid-Atlantic seaboard, and American South - Traditional lacrosse games were sometimes major events that could last several days. As many as 100 to 1,000 men from opposing villages or tribes would participate. The games were played in open plains located between the two villages, and the goals could range from 500 yards (460 m) to several miles apart - Rules for these games were decided on the day before. Generally there was no out-of-bounds, and the ball could not be touched with the hands. The goals would be selected as large rocks or trees; in later years wooden posts were used. Playing time was often from sun up until sun down - The game began with the ball being tossed into the air and the two sides rushing to catch it. Because of the large number of players involved, these games generally tended to involve a huge mob of players swarming the ball and slowly moving across the field. Passing the ball was thought of as a trick, and it was seen as cowardly to dodge an opponent -

The medicine men acted as coaches, and the women of the tribe were usually limited to serving refreshments to the players - There was also a women's version of lacrosse called amtahcha, which used much shorter sticks with larger heads -

Lacrosse traditionally had many different purposes. Some games were played to settle inter-tribal disputes. This function was essential to keeping the Six Nations of the Iroquois together. Lacrosse was also played to toughen young warriors for combat, for recreation, as part of festivals, and for the bets involved. Finally, lacrosse was played for religious reasons: "for the pleasure of the Creator" and to collectively pray for something - Some early lacrosse balls were made out of wood. Others were made of deerskin stuffed with hair. They were typically three inches in diameter.

The first lacrosse sticks were essentially giant wooden spoons with no netting. A more advanced type had one end bent into a 4 to 5-inch (130 mm) diameter circle, which was filled with netting. This netting was made of wattup or deer sinew. The most recent Native American sticks use a U-shape instead of a circle.

These sticks were bent into shape after being softened through steaming, and lengths typically ranged from 2 to 5 feet (1.5 m). Lacrosse sticks often had elaborate carvings on them intended to help players in the game. Lacrosse sticks were so treasured that many players requested to be buried with their stick beside them -

Some versions of lacrosse used unusual stick designs. In the St. Lawrence Valley a version was played in which the head took up two thirds of the stick. In the Southwestern United States a double-stick version was played with sticks about two and a half feet long -

No protective equipment was worn in traditional lacrosse - The first westerners to encounter lacrosse were French Jesuit missionaries in the St. Lawrence Valley. During the 1630s, they witnessed the game and condemned it. They were opposed to lacrosse because it was violent, betting was involved, and it was part of the religion they sought to eradicate -

One missionary, Jean de Brébeuf, was the first to write about lacrosse and thus gave it its name. He described the Huron Indians playing in 1636. Some say the name originated from the French term for field hockey, le jeu de la crosse. Others suggest that it was named after the crosier, a staff carried by bishops -

Despite Jesuit opposition, many other European colonists were intrigued by lacrosse. Betting on games became common, and around 1740 many French colonists were taking up the game. However, it is widely believed they could not match the skill of the Native Americans