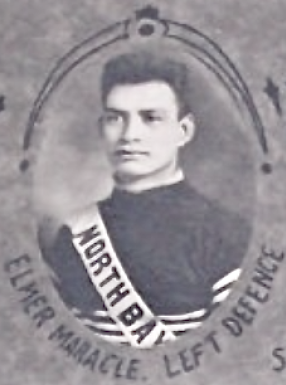 Maracle learned to play Hockey in Haileybury, Ontario while attending school and later got his first taste of championship Hockey when he was playing for the North Bay Trappers, which won the 1923-24 Northern Ontario Junior Championship, part of the Northern Ontario Hockey Association / NOHA.

Maracle had been a alternate captain, then named captain of the Springfield Indians.

Maracle made his NHL debut with the New York Rangers on February 12, 1931 at The Olympia vs the Detroit Falcons in 1-1 OT tie.

Contemporary newspaper accounts during his pro playing days - despicable as some were, had titles like “Indian Wins Spurs with Hockey Club”, Indian Puck Star and “Redskin Icer”, which went on to read “…is the only full-blooded redskin to reach professional Hockey’s major league.” Reporters also sprayed their columns with references to “war whoops” and “wigwams,” “tomahawks” and “scalps.”

Maracle then joined the Detroit Holzbaugh-Fords / Pontiac McLeans of the Michigan-Ontario Hockey League / MOHL for the 1937-38 season, later helping them win the 1939 MOHL playoff championship.

Maracle then headed south to the Southern California Hockey League / SCHL, joining the the San Diego Skyhawks. He played his final 3 seasons with the Skyhawks.

NOTE
Maracle had to give up his Mohawk status when he became a American resident.