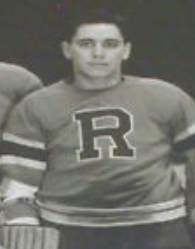 Jamieson grew up on the Six Nations of the Grand River Territory in Ontario, learning to skate and play Hockey on frozen ponds with his older brother Wendell and other reserve kids.

There are no records about his youth playing days, except his senior Hockey in the Michigan-Ontario Hockey League / MOHL with the Detroit Holzbaugh-Fords in the early 1940s.

Jamieson played 1 game for the New York Rovers in the 1943 Eastern Amateur Hockey League / EAHL playoffs. Jamieson then played the 1943-44 season with the Rovers, and had a 1 game call-uo to the NHL with the New York Rangers on January 13, 1944. Jamieson assisted on a goal by Hank Damore at 12:58 of the 2nd period, but the Rangers would lose the game 5-2 to the Black Hawks. It would be the only NHL game of Jamieson's career.

Jamieson then traveled to the west coast to play two seasons for the Pasadena Panthers of the Pacific Coast Hockey League / PCHL before returning east to play one year with the Baltimore Orioles of the EAHL.

Jamieson joined the Powassan Hawks for the 1947-48 season, and then played in the International Hockey League / IHL for the 1948-49 season with both the Milwaukee Clarks and the Akron Americans.

Jamieson then returned home to Brantford, Ontario to coach the OHA senior Brantford Nationals from 1949 to 1951.

Jamieson finished his playing career with the Brantford Redmen during the 1951-52 season.

Jamieson only played 1 game in the NHL, becoming the 2nd Indigenous Hockey player to skate in the NHL, after Henry Maracle in 1931, and before Fred Sasakamoose in 1954.