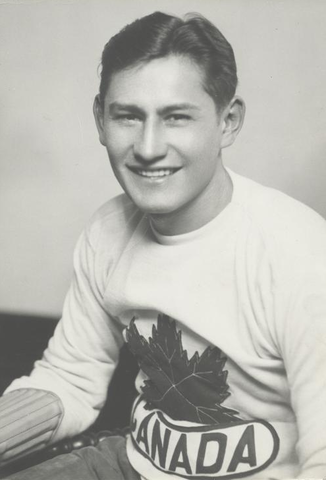 Moore is believed to be the first Indigenous / Aboriginal person in Canada to win an Olympic Gold Medal.

One of Canada’s earliest First Nations Olympians, Ken Moore was a member of the Peepeekisis First Nation. He was the third of eight children, but only three of his siblings survived into adulthood. His older brothers died while part of the Canadian Indian residential school system, a tragedy that caused his family to move from Balcarres to Regina, Saskatchewan, where they became one of the early First Nations families to reside in that city.

It was there that he began playing Hockey and, as a family of extremely modest means, Moore’s parents James and Edith sacrificed to provide him with the equipment he needed to participate in sport. All family savings went to purchase skates, jerseys and other equipment. At a young age, Moore demonstrated athletic ability which was matched only by his sportsmanship. One early indication was his receiving the Eilers’ Medal, which was awarded to a player in the Regina Junior Hockey Association who, in the estimation of the fans, was looked upon as “the cleanest athlete” and best display of sportsmanship.

In addition to Hockey, he also played baseball, lacrosse, rugby, basketball and was also a speed skater. At a time when few Canadians, and almost no Aboriginal Canadians, attended university, Moore’s athletic ability enabled him to win scholarships. He attended Campion College and Regina College on athletic scholarships, where he captained Hockey and rugby teams, and was described as “the most versatile athlete in the College.”

Moore was a National Junior Hockey Champion with the Regina Pats, scoring the winning goal with 40 seconds left in the game to bring home the Memorial Cup championship in 1930.

The Olympics, however, were not the end of Moore’s career. He was a member of the Kimberley Dynamiters in 1936 when they won the Allan Cup. Moore would assist on Hugo Mackie's winning goal in overtime to give the Dynamiters the Allan Cup championship.

Later in his career, Moore coached the St. Boniface Athletics to the Manitoba Amateur Hockey Association junior north division Hockey championship title in 1942 and 1943, and the St. James Canadians to the junior south title and the Manitoba Provincial Junior Hockey Championships in 1944.

Moore married Edith Mae McDougall and had one daughter, two granddaughters, and one great grandson.