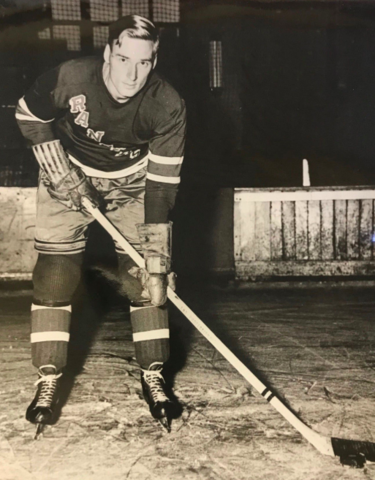 Russell played all his minor Hockey in Winnipeg, and played for the St. James Deer Lodge the year (1939) before starting his junior Hockey career.

Russell then played for the Winnipeg Rangers in the Manitoba Junior Hockey League in 1940. By 1942, Church had become a solid goal scorer for the Rangers, leading the team with 23 goals, 13 assists in the regular season, and then in the playoffs, scored 16 goals, 4 assists helping the Rangers win the 1943 Abbott Cup as Western Canada champions, and then the 1943 Memorial Cup championship.

Russell had already been drafted for WWII, and was in the Winnipeg Navy during the 1942-43 championship season, and would then spend the next 2 years helping Canada's war efforts. Russell did play Hockey during the 1942-43 season with the Victoria Navy team in the Pacific Coast Hockey League / PCHL.

After his war service, Russell was signed by the New York Rangers organization, and would play for their minor league team, the New York Rovers of the Eastern Amateur Hockey League / EAHL. Church was put on a forward line with Cal Gardner and Rene Trudell, and they would become known as "The Atomic Line" who thrilled the fans at Madison Square gardens with their offensive power. Church was named to the EAHL First All-Star Team for 1946.

The New York Rangers were struggling to make the 1946 playoffs, and manager Frank Boucher called up the entire Rovers Atomic Line to help the Rangers for the final 17 games of the season. The Atomic Line fizzled, Russell only got 5 assists, and the Rangers missed the playoffs.

Russell played the final 40 games of the season with the Barons, scoring 13 goals, 18 assists, and was a big part of their playoffs, where he scored 3 goals, 5 assists helping the Barons win the 1948 Calder Cup championship.

Russell played for the Barons during the next season, then moved on to the AHL's Pittsburgh Hornets for the 1949-50 season.

In 1950-51, Russell returned to the PCHL as a member of the Vancouver Canucks for the season.

Russell then played with the Winnipeg Maroons, helping them win the 1953 Pattison Cup as Manitoba Senior Champions, but then lost in the Allan Cup West quartet-final.

Russell retired from Hockey after spending his last two seasons with the Manitoba Senior Hockey League's Brandon Regals in 1954 & 1955.

Church Russell is a “Honoured Member” of the Manitoba Hockey Hall of Fame, inducted in 1993.