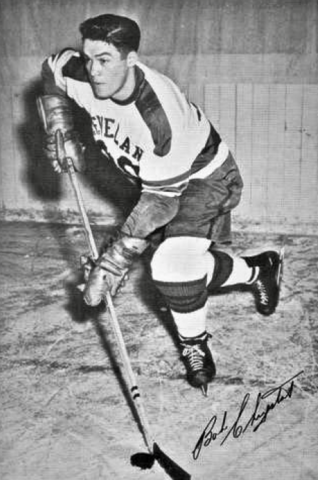 Chrystal played his junior Hockey for the Brandon Wheat Kings, and in 1949 lost to the Montreal Royals in the only eight-game Memorial Cup final ever played.

The Cleveland Barons defeated Pittsburgh Hornets 4 games to 3, to win the 1953 Calder Cup....Chrystal scored the championship winner in overtime of game 7.

Chrystal made his NHL debut on October 8, 1953 playing for the New York Rangers vs Detroit Red Wings in a 4-1 loss at Detroit Olympia.

Chrystal scored his 1st NHL goal vs Al Rollins of the Chicago Black Hawks on November 11, 1953 in a 3-2 win at Madison Square Garden. His goal at 16:17 of the 3rd period was the game winner.

Bob Chrystal is a Honoured Member of the Manitoba Hockey Hall of Fame, inducted in 1995.