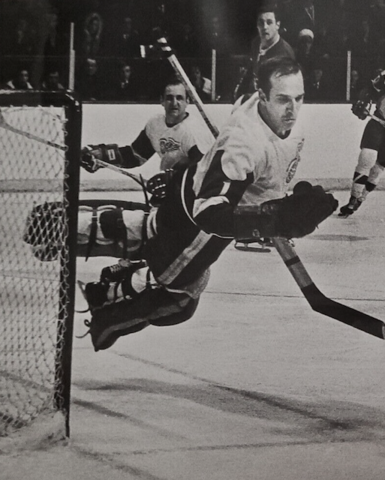 Crozier spent his junior career with the St. Catharines Teepees of the Ontario Hockey Association (OHA-Jr.) from 1959 to 1962. Crozier helped the Teepees win the 1960 J. Ross Robertson Cup as OHA champions and the 1960 Memorial Cup championship. He was also a OHA-Jr. First All-Star Team in 1960, 1961 & 1962.
During his time with the Teepees, Crozier developed his first ulcer (pancreatitis), a problem that would plague him for the rest of his career.

The Chicago Black Hawks owned the NHL rights to Crozier, and traded him to the Detroit Red Wings with Ron Ingram for Howie Young, June 5, 1963. The Red Wings sent Crozier to their minor league team, the AHL Pittsburgh Hornets for the 1963-64 season, where he won the Harry "Hap" Holmes Memorial Award (fewest goals against), and the Dudley "Red" Garrett Memorial Award for AHL Rookie of the Year 1964. Crozier was voted to the AHL Second All-Star Team. Crozier also made his NHL debut that season on November 30, 1963 vs Toronto Maple Leafs at Maple Leaf Gardens in a 1-1 tie.

In 1964–65, his rookie season, Crozier started all of his team's games, the last goalie to do so in the NHL, and he led the league in wins and shutouts with 40 and six respectively. His 2.42 GAA was the second lowest in the league. He was awarded the 1965 Calder Memorial Trophy as the NHL's top rookie and he was named to the 1965 NHL First All-Star Team.