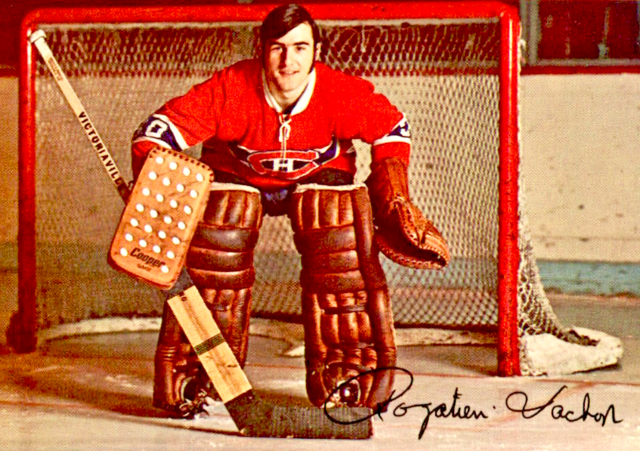 NHL Debut with the Montreal Canadiens on February 18, 1967 vs the Detroit Red Wings at The Forum in Montreal. Gordie Howe was the first to score a NHL goal on him, but the Canadiens won the game 3-2. His 1st NHL shutout came on March 5, 1967 vs the New York Rangers at Madison Square Garden. Vachon played only 19 games during the season, but played most of the games in the playoffs and led the Canadiens to the Stanley Cup Finals. They lost to the Toronto Maple Leafs.

Vachon, now playing in Detroit, recorded the Red Wings 1st loss at Joe Louis Arena on December 27 1979 vs the St. Louis Blues, then recorded the 1st victory at The Joe on December 30 vs the New York Islanders, a 4-2 win.

Vachon, one of the premier one-on-one goaltenders of his era, never allowed a goal on a penalty shot in his entire career.

His number 30 was the first number retired by the Los Angeles Kings, in a ceremony on February 14, 1985.

Rogie Vachon was inducted into the Hockey Hall of Fame in 2016.