Badger Bob Johnson - It's a great day for Hockey 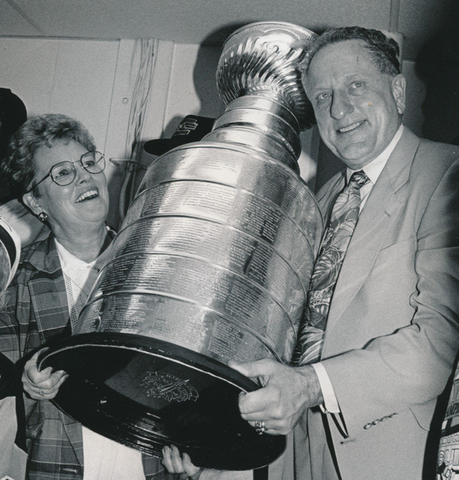 Badger Bob played Hockey in the City Park Board League, was an all-star in Minneapolis Central High School and took on his first coaching assignment at the age of 13 when he guided a local midget team. During his years playing forward at the University of North Dakota and the University of Minnesota, where he played Hockey under legendary coach John Mariucci.

After serving as a medic during the Korean War, Badger Bob became the head coach of the Warroad high school in rural Minnesota. After one season he moved to Roosevelt High School in Minneapolis and won four city championships in six seasons. He would teach his History class using a Hockey stick as a pointer to the chalkboard. He became the head Hockey coach at Colorado College in 1963.
In 1966, he moved to the University of Wisconsin–Madison, where he was head coach until 1982. He led the Badgers to seven NCAA tournaments, winning three championships in 1973, 1977, 1981 and was named the NCAA's top coach in 1977. It was at Wisconsin where Johnson earned the nickname, "Badger Bob."

In 1982, Badger Bob began his National Hockey League career when he became the head coach of the Calgary Flames, a position he held for five seasons. In the 1985–86 season, he coached the Flames to the Stanley Cup Finals, where they lost 4 games to 1 to the Montreal Canadiens. From 1987 until 1990, he served as the President of USA Hockey. Then in 1990, he was named the head coach of the Pittsburgh Penguins. In his first season, he coached the team, which was led by superstar Mario Lemieux, to a 1991 Stanley Cup Finals championship victory over the Minnesota North Stars, four games to two, becoming the second American-born coach to win it and the first in 53 years. He was well-known amongst players and fans for his enthusiasm and unflappable optimism, immortalized through his famous catchphrase "It's a great day for Hockey!" That would be his only season coaching the Penguins.

In August 1991, as he was preparing the U.S. team for the upcoming Canada Cup tournament, Badger Bob suffered a brain aneurysm and was hospitalized, where he was diagnosed with brain cancer. He was then flown on a private plane to Colorado with Dr. Dan Thompson of Mercy Hospital in Pittsburgh. He began treatment and turned the day-to-day supervision of the Penguins over to his three assistant coaches and Scotty Bowman, the team's director of player development and recruitment, who was named interim head coach. Though the team was "coached by committee", Johnson continued to oversee them from his hospital room by way of videotape and remained in contact by fax machine.

Badger Bob died of brain cancer in Colorado Springs, Colorado, on November 26, 1991. After his death, his catchphrase was emblazoned on a banner hanging over the ice at the University of Wisconsin–Madison and was painted at the bluelines on the ice in Pittsburgh's Civic Arena. In memoriam, it remained on the ice there for the remainder of the season. In addition, Penguins players would wear a patch on the left sleeve of their jerseys with the word "BADGER" under his birth and death years. Pittsburgh also put his name on the Stanley Cup a second time after their second straight Cup victory in 1992. "He's such a tremendous person...We would like to win it again for him," said Mark Recchi, a member of the team in 1991.

At the team's 1992 victory celebration at Three Rivers Stadium in Pittsburgh, Bowman's first remark was that "the coach of the Pittsburgh Penguins will always be – Bob Johnson".

Badger Bob Johnson was inducted into the Wisconsin Hockey Hall of Fame in 1987.

Badger Bob Johnson was inducted into the United States Hockey Hall of Fame in 1991.

Badger Bob Johnson was inducted into the Hockey Hall of Fame in 1992.

Badger Bob Johnson was elected to the Wisconsin Athletic Hall of Fame in 1993.