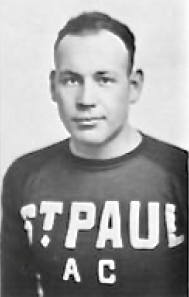 Abel learned to play Hockey on the St. Mary’s River in Sault Ste. Marie Michigan. He later worked at the local arena as a ice sweeper between periods, trading his work time for ice time at the rink, becoming what is known now as a rink rat.

Abel did not play his first organized Hockey game until he was about 18 years old, playing for the local Sault Wildcats / Michigan Soo Wildcats of the United States Amateur Hockey Association / USAHA.

The 1921-22 season was the last for the Wildcats in the USAHA, but Abel stayed in the league, joining the St. Paul Athletic Club ( AC's / Saints), a Minnesota team, who played in the famous Hippodrome. Abel helped the AC's win the 1922-23 USAHA Western/Northern (group 2) championship, which put them in the final for the championship of the United States. The AC's lost to the Boston Athletic Association.

His solid physical play and size (6'1 - 225lbs) earned him a berth on the U.S. Olympic team that traveled to the 1924 Winter Games in Chamonix, France.

Abel was selected by his fellow United States athletes, and elected him to carry the flag in the parade of nations.

All the competitors took an Olympic style oath and were led by Camille Mandrillon of France.

Now recognized by the International Olympic Committee / IOC as the 1st Native American/Indigenous Athlete (Sault Chippewa) to participate in a Winter Olympics, including being the Flagbearer for the USA team. Abel became the first American to carry the U.S. flag at the first ever opening ceremony of the Olympic Winter Games in 1924. He remains the only Native American / Indigenous athlete to have carried the United States’ flag at an Olympic Opening Ceremony.

Abel scored 15 goals for the USA team, helping them reach the gold medal game vs Canada, where they lost 6-1, winning the Silver Medal.

At the conclusion of the Olympic games, Abel traveled back to the U.S. and then to the Sault, where hundreds greeted him at the train station. A banquet was held in his honor where he was presented with a gold watch. He told the audience that "this city can count on me ... to help put the old town on the map."

Abel returned to the St. Paul club for a third and final season. Then, in 1925, he made his professional debut with the Minneapolis Millers of the competitive Central Hockey League for the 1925'26 season. Abel was paired on defence with Ivan "Ching" Johnson and was named to the CHL's First All-Star team at the defence position.

That same year, Conn Smythe, the future founding owner of the Toronto Maple Leafs, was tasked with recruiting a top-notch roster for the New York Rangers' inaugural season in the NHL. According to Smythe's memoir, he traveled to Minnesota to scout Abel, Ching Johnson and others.

Smythe would eventually sign both Abel and Johnson for the 1926-27 NHL season. The 2 players would, becoming good friends and teammates, play their 1st NHL game on November 16, 1926 at Madison Square Garden vs the Montreal Maroons, who were the defending Stanley Cup champions, with the Rangers winning 1-0. Abel got on the scoresheet in his 1st NHL game, but it was for 2 minor penalties.

Abel was now the first Native American / Indigenous Hockey player in the NHL.

Abel scored his 1st NHL goal on December 7, 1926 vs Charles Stewart of the Boston Bruins. The goal was the game winner in a 1-0 victory for the Rangers.

“Ching and Taffy are being described as the ‘patented derrick,” reported The Minneapolis Star. “One writer has fittingly described Ching and Taffy as ‘tall cedars of the forest’ and they are hard to knock over.”

During the 1927-28 season, Abel's second in New York, he scored his only NHL playoff goal and point, when, in the first round vs the Pittsburgh Pirates, with Roy Worters in goal, Abel opened the scoring in game 2.

The Rangers won the first series vs Pittsburgh in 2 games, then defeated the Boston Bruins in a 2 game semi-final, sending them to their 1st Stanley Cup finals. In the second game on April 7, Rangers' goaltender Lorne Chabot was struck in the eye by a Nels Stewart shot and taken out of the game. Without a backup goalie they could use, coach/general manager Lester Patrick who was 44 years old dressed for the position, and in one of the most famous incidents in Hockey history, aided by standout play from Abel and Johnson, stopped 17 of 18 shots en route to a 2-1 overtime win. The Rangers would go on to win the series 3-2 and the 1928 Stanley Cup championship.

The Rangers played their way into the finals again in 1929, but lost to the Boston Bruins. Less than three weeks later, the last-place Chicago Black Hawks purchased Abel's contract for a reported $15,000.

Abel helped the Black Hawks make it to the playoffs for the first time in three years. They played the Montreal Canadiens in the quarter-final playoff series, losing the first game 1-0, and then losing the series in the second game, a triple overtime, which was the longest contest in NHL history to that point. The game ended in a 2-2 tie, when Howie Morenz scored at 11:53 of the third overtime, giving Montreal the series based on total goals 3-2. It was reported in newspapers at the time, that Abel played almost the entire game without a break.

Abel became a fan favourite in Chicago and was a defensive stalwart for the Black Hawks for five seasons, wearing sweater number 2.

Abel helped the Black Hawks reach the 1931 Stanley Cup finals, where they played the Montreal Canadiens again, this time in a best of 5 series. Game three went to triple overtime, with Chicago winning this time, but the Canadiens would win the series 3-2.

Abel helped the Black Hawks make the playoffs again in 1932, but they missed the 1933 NHL playoffs. The Black Hawks returned to the playoffs in 1934, and defeated the Montreal Canadiens in the first round, the Montreal Maroons in the second round, which put them in the best of five game Stanley Cup finals vs the Detroit Red Wings. Abel played solid defence for Chicago, picking up only 1 minor penalty in the series, as the Black Hawks defeated the Red Wings in 4 games, winning the 1934 Stanley Cup championship - Chicago's 1st Stanley Cup.

At the start of the 1934-35 NHL season, Abel was in a contract dispute with Chicago, not showing up for training camp or the start of the regular season. He eventually showed up in Chicago in late December, overweight, with the intention of getting back into playing shape and working out the final details of his contract. Dissatisfied with the team's terms, Abel made his holdout permanent. After he went to the press with his side of the story, the Chicago front office rebutted, and closed with the following: "Abel, never again will appear in a Black Hawk uniform."

After 16 seasons of amateur and professional Hockey, including 371 games in the NHL, Abel returned to Sault Ste. Marie. There, he and his wife, Tracy, operated "Taffy" Abels Log Cabin Cafe. Later, Abel and Tracy opened the Taffy's Lodge, whose advertisements boasted the resort's "clean, modern cabins" and picturesque view of the St. Marys River.

Abel kept his heritage as an Indigenous man to himself for many years, for many reasons. In 1920, Taffy’s father passed away when Taffy was 20, leaving him as the family breadwinner. In fear of racial discrimination, Taffy Abel chose not to disclose his background until many years later in 1939, and “passed” himself as white throughout his NHL career.

Abel returned to Hockey as a coach with the newly formed Sault Americans in 1938, and then cofounded the Soo Indians of the Northern Michigan Hockey League for the 1939-40 season.

Taffy Abel was named a charter member of the Upper Peninsula Sports Hall of Fame in 1972.

When the United States Hockey Hall of Fame opened in 1973, Taffy Abel was one of its charter members, who said of him, “Abel’s fabulous climb from Sault Ste. Marie amateur ranks to the NHL stamped him as a legend in Hockey. He left an indelible imprint in pro and amateur circles as a player, coach and manager. Taffy Abel was a name beloved by Hockey followers across the continent in the era of the 60-minute men.”

The U.S. Hockey Hall of Fame ends their biography on Taffy Abel with "Thought by some to be the first Native American to play in the NHL"

Clarence "Taffy" Abel was posthumously inducted into the American Indian Athletic Hall of Fame in 1989 - an effort undertaken by the Sault Tribe of Chippewa Indians.

In 1990, Lake Superior State University chose to name its ice arena for him; at the Sault's Pullar Stadium - The Taffy Abel Arena is a 4,000 seat Hockey arena.

NOTE - Abel's lineage can be traced through his mother, Charlotte Gurnoe Abel, whose mother was white and whose father, John Gurnoe, was a member of the Chippewa tribe.

Sourced from George Jones and Historical Records - Taffy Abel was my Uncle.. Credited to George Jones.

February 4, 2022 marks the Centennial Anniversary of Clarence "Taffy" Abel (1900 -1964) as the first Native American / Indigenous (Sault Chippewa Tribe) in the first ever Winter Olympics in France in 1924. His hometown is Sault Ste Marie, Michigan USA.

Taffy was picked by fellow American Olympians to be the USA Flag Bearer in the 1924 Winter Olympics. As team captain, he then led the US Hockey Team in winning an Olympic Silver Medal.