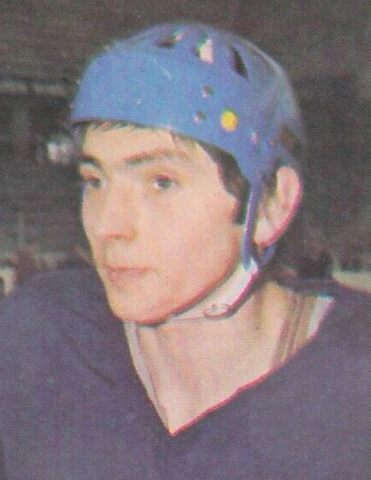 Hlinka would first play in the Czechoslovak First Ice Hockey League was he was 16 years old, still playing for HC Litvínov.

Hlinka was named captain of the HC Litvínov men's team when he was 20 years old in 1970.

Hlinka would play in the Czechoslovak First Ice Hockey League for 544 games, scoring 347 times for his HC Litvínov team.

Hlinka had two 70 point seasons, six seasons of 50 or more points and 11 seasons out of 15 with more than a point per game and 10 with 20 goals or more with a high of 39, all while never even playing as many as 45 games in a single season.

Hlinka would win the Golden Hockey Stick / Zlatá hokejka award in 1978 as the top player in the Czechoslovak First Ice Hockey League.

In 1969. Hlinka made his debut on the Czechoslovakia men's national ice Hockey team, and would represent his country until 1981.

Hlinka would play 256 games as a member of the Czechoslovak national team, where he would score 132 goals in International play.

Hlinka would also win a Winter Olympic Bronze Medal in 1972, and a Silver Medal in 1976 playing for the Czechoslovak national team.

Hlinka played in the inaugural Canada Cup tournament in 1976, the international tournament in which the best available players competed for their countries (most notably, players from the NHL). Canada defeated Czechoslovakia in the best-of-three final 2 games to 0.

Hlinka was captain of the Czechoslovak national team from 1977 to 1980, which included winning the world championship in 1977 and two silver medals in 1978 and 1979.

In 1981, Hlinka and fellow Czech Jiří Bubla joined the NHL's Vancouver Canucks. This started the Czech migration to the NHL. They were the first Czechoslovak players to compete in the NHL with the permission of their country's authorities. (Jaroslav Jiřík played legally in NHL in 1969–70 season but only three games). Playing in his first NHL season, Hlinka, admittedly a veteran player at the age of 31 set a Canucks record for the most points by a rookie with 60 (it was later tied by Pavel Bure in 1991–92). During the subsequent 1982 Stanley Cup playoffs, Hlinka would add another 8 points in 12 games as the Canucks advanced to the Finals against the New York Islanders. In a losing effort (Vancouver lost the series in four straight games), Hlinka and Bubla became the first Czechs to ever play in the Stanley Cup Finals. The following season, Hlinka improved to 63 points over 65 games. In his two years in the NHL, Hlinka totalled 42 goals and assisted on 81 others in 137 games.

Hlinka would return to Europe for the 1983-84 season, joining EV Zug of the second division in Switzerland, where he set career highs with 46 goals and 89 points in 41 games. One more season with EV Zug saw him score 30 goals and 73 points before retiring as a player to enter the world of coaching.

Hlinka would return to Czechoslovakia, and began to coach in “his” Litvínov; later he coached temporarily in Freiburg, Germany.

He also became very famous for his trick in the 1986–87 season. Litvínov was in last place in the standings of the Czechoslovak league. Hlinka, already 37 years old, began to play again. Litvínov immediately improved its game and went unbeaten in Hlinka's first eight games (6 wins, 2 ties). Altogether, he played 19 games and got 23 points.

In the 1990s, he was coach of Czechoslovak and later Czech national teams. His teams won bronze medals at the 1992 Albertville Winter Olympics and the World Championships in 1992 and 1993. He left the national team after an unsuccessful World Championship in 1994, only to return again in 1997, winning bronze yet again.

Hlinka became a national hero when his team won the gold medal at the Nagano Olympics; the first time that the NHL agreed to release its players for the Games. The triumph was celebrated by the whole nation. The dominance of the Czech Hockey team in the world was confirmed one year later when Hlinka's team won the 1999 World Ice Hockey Championship.

In 2000–01, Hlinka returned to the NHL as head coach of the Pittsburgh Penguins He was the second European ever to coach in the NHL (following Alpo Suhonen). His first season also coincided with Mario Lemieux's return to the NHL, and together they made a surprising run to the Eastern Conference Finals, knocking off the higher seeded Washington Capitals and Buffalo Sabres along the way before falling to the New Jersey Devils. The next season was not successful, as the struggling small-market Penguins had traded their superstar, Jaromir Jagr. Hlinka himself was criticized by Lemieux for not taking classes in the summer to improve his English and that contributed to the frosty relationship between them. He was fired four games into the 2001–02 season and returned to Europe.

Hlinka returned to the Czech Republic National Team, first as General Manager for the 2002 Olympics and World Championships before becoming head coach of Avangard Omsk of the KHL for the 2002-03 season.

He then became the head coach of the Czech Republic National team once again in 2004, but sadly, just six weeks prior to the 2004 World Cup of Hockey, Hlinka was killed in a car accident on August 16, 2004 at the age of 54.

The Ivan Hlinka Memorial Tournament is held in the Czech Republic and Slovakia for under-18 national teams every August in his memory.

HC Litvínov's home arena was renamed in his honor and is now known as Ivan Hlinka Stadion where his retired sweater #14 hangs from the rafters.

Ivan Hlinka was inducted into the International Ice Hockey Federation / IIHF Hall of Fame in 2002.