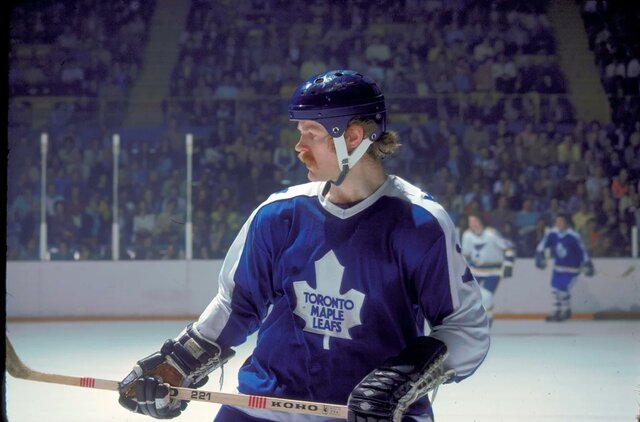 This guy bleeds Hockey Blood. At birth, his father gave him the middle name of "King" after the Hockey Legend "King Clancy". Lanny would later be the 1st recipient of the King Clancy Memorial Trophy in 1988.

Speaking of 1st, Lanny had many in Hockey. He was the 1st Alberta born captain of a NHL team to win/raise the Stanley Cup for the Province of Alberta and he was the 1st Flames player to parade the Stanley Cup around a arena, and on sacred ground.....The Montreal Forum. He scored the 1st Flames goal in the Olympic Saddledome, on the building's opening night of October 15, 1983. He was the 1st player to have his jersey retired by the Calgary Flames. The 1st former Flame to gain induction into the Hockey Hall of Fame. The 1st winner of the Ralph T. Scurfield Humanitarian Award (1987). The 1st recipient of the King Clancy Memorial Trophy (1988) and don't forget he assisted on the winning goal at the 1st Canada Cup in 1976.

Lanny McDonald even has a beer named after him. The tribute beer is "Old Stache Porter" honoring Lanny McDonalds iconic mustache, and the fact the Tamarack Brewing Company stash's the beer away for 180 days. The barrel-aged porter is released every year on Lanny's birthday, February 16.

There is a great biography on Lanny McDonald on Wikipedia if you wish to read what this man has really done in Hockey, but here are the HockeyGods facts.

After leading his Medicine Hat Tigers to the 1973 President's Cup as champions of the Western Canada Hockey League / WCHL, Lanny was named to the 1973 WCHL All-Star Team at right wing.

Lanny made his NHL debut with the Toronto Maple Leafs on October 10, 1973 vs Buffalo Sabres at Maple Gardens in a 7-4 Toronto win. He had 2 assists in the game and also a concussion, stitches on his head, which he landed on after a check by Rick Martin. Lanny started wearing a helmet every game after this incident.

Lanny scored his 1st NHL goal vs Michel "Bunny" Larocque of the Montreal Canadiens on October 17, 1973 at 17:43 of the 3rd period at The Forum in 5-3 Toronto win. His goal was the game winner.

Colorado State Athlete of the Year 1980 with Colorado Rockies.

Lanny McDonald was inducted into the Hockey Hall of Fame in 1992.

Lanny McDonald was inducted into the Alberta Sports Hall of Fame in 1993.

Lanny McDonald was inducted into the Canada's Sports Hall of Fame in 2017.

Lanny McDonald was named to the Order of Hockey in Canada in 2022.

Following his retirement from the NHL, Lanny became a vice-president of corporate and community affairs with the Calgary Flames and served in various positions with the team until 2003. He also served as general manager of the Canadian national men’s team at the 2001 and 2002 world championships and as director of player personnel for the 2004 championship, where Canada won the gold medal. Lanny served for years on the Hockey Hall of Fame’s selection committee and in 2015 was named chair of the Hockey Hall of Fame.