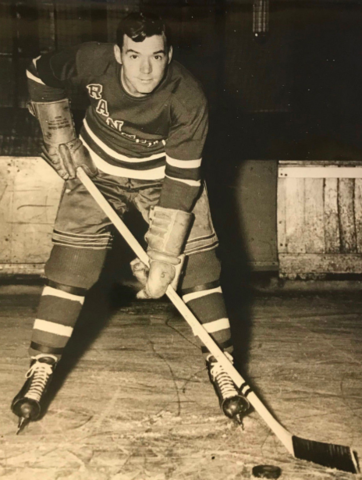 O'Connor played pick-up Hockey while attending grade school and soon graduated to Montreal's city league and played his first game at the Montreal Forum at 12 years of age when his Bantam Hockey team made it to the city finals.

By his mid-teens he discovered that he could not land a try-out with the Montreal Royal Juniors because the coach thought that he was too small. So, O'Connor took his Hockey talents to the Mount Royal Arena where the "B" league teams played. He earned a position with the Crane Juniors playing on a line with Pete Morin and Crane tore up the league, defeating the Montreal Royal Juniors for the city title. O'Connor was 17 when he and Morin were asked if they wanted to tour Europe with a Canadian Hockey team. Although Buddy wanted to go, his mother insisted that he stay in school and finish his studies at St. Willibrord High School where he was studying accounting. Morin went to Europe and Buddy stayed behind, though he was offered a position with the Royal Juniors, the team that initially considered him to be too small.

O'Connor lead the Royal Juniors with 15 goals and 22 points in 1934-35 and was promoted to the Royals Senior team for the Allan Cup playdowns, scoring a goal in the only game he appeared in. The following year, he was with the Senior Royals to stay and was the Quebec Senior Hockey League's leading scorer in the 1938-39 season, also scoring 15 goals, 14 assists in 18 playoff games.

O'Connor broke in to the NHL with the Canadiens alongside his long-time senior Hockey line mates Pete Morin and Gerry Heffernan for the 1941-42 season. The trio of O'Connor, Morin, and Heffernan were dubbed the "Razzle Dazzle Line" while with the Royals, but an injury to Morin near the end of the 1941-42 season ended their brief time together in the NHL. O'Connor continued as a solid contributor with the Canadiens and helped them win Stanley Cup championships in 1944 and 1946.

O'Connor was traded to the New York Rangers with Frank Eddolls for Hal Laycoe, Joe Bell and George Robertson, August 19, 1947. At age 31 and in his first season with the Rangers, O'Connor recorded career-high marks for goals, with 24, and points, with 60. He missed the league scoring title by only one point, finishing second to Montreal's Elmer Lach. O'Connor was named to the NHL Second Team All-Star at centre.

O'Connor did win the Hart Trophy as league's most valuable player as well as the Lady Byng Trophy as most gentlemanly player in 1947-48. He was the first player to win both awards in the same season. In a fitting tribute to his great season he was named Canada's athlete of the year for 1948.

missed a significant part of the 1948-49 season due to injuries sustained in a car accident and saw his point production drop over the next three years before finishing his pro Hockey career with a Second Team All-Star nod as a member of the American Hockey League's Cincinnati Mohawks in 1951-52.

Buddy O'Connor was inducted into the Hockey Hall of Fame in 1988, becoming the first inductee into the now defunct Veteran category.