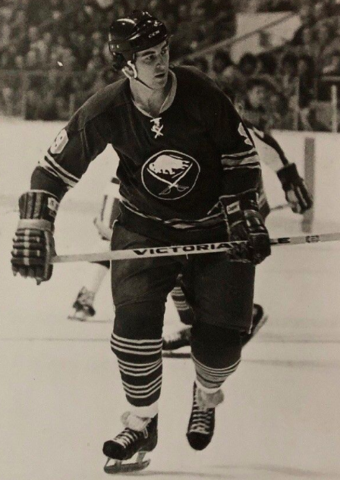 Breitenbach played his first junior Hockey with the Welland Sabres of the OHA Junior B league in 1971-72. In 1972-73. Breitenbach then joined the St. Catharines Black Hawks after a strong training camp with them. In his rookie year, he played in 37 games, scoring a goal and nine points. In 1973-74, the Blackhawks won the J. Ross Robertson Cup as Ontario junior champions and earned the right to represent the league in the Memorial Cup in Calgary, Alberta.

Breitenbach then played one more season with the Black Hawks before turning pro with the Hershey Bears of the American Hockey League / AHL for the 1975-76 season, helping the Bears reach the Calder Cup finals with 1 goal and 2 assists in the playoffs. Breitenbach also played his first 7 games in the NHL during the season with the Buffalo Sabres, and 1 playoff game too.

The following year he played in 31 games with the Sabres, tallying five points, while also playing in 37 games for the Bears. He missed the entire 1977-78 season after breaking his leg in training camp in September.

Breitenbach attempted a comeback in 1978-79 season, and although he did play in 30 games for the Sabres and 17 games for the Bears, he realized he could not continue, and retired at seasons end. The bright spot, however, was that Breitenbach did score his one and only NHL goal that year and finished with nine points.