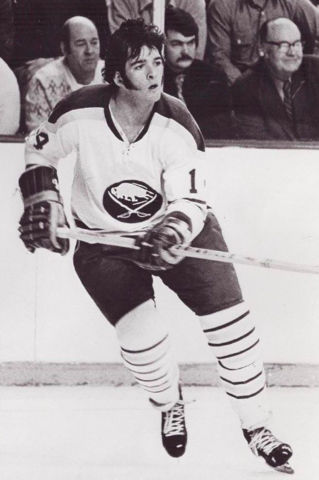 Gratton then turned pro with the Omaha Knights of the Central Hockey League / CHL at the start of the 1970-71 season, scoring 19 goals, 31 assists during the season, then 6 goals, 2 assists in the playoffs, as the Knights won the 1971 Adams Cup championship. Gratton played the next season in Omaha too, and got a 3 game call-up by the New York Rangers, getting 1 assist.

Gratton was then claimed by the NHL Atlanta Flames from the Rangers in Expansion Draft, June 6, 1972, and would play for both the Knights and the Flames during the start of the 1972-73 season, before he was traded to the Buffalo Sabres by Atlanta for Butch Deadmarsh, February 14, 1973.

Gratton would play in Buffalo for basically 2 seasons, until he was traded to the Minnesota North Stars by Buffalo with Buffalo's 3rd round pick (Ron Zanussi) in 1976 Amateur Draft for Fred Stanfield, January 27, 1975. He would play in 66 games over 2 seasons with the North Stars.

Gratton would finish his Hockey career with the New Haven Nighthawks in 1976, and then his final season with the Maine Nordiques, helping them to the North American Hockey League championship finals in 1977.