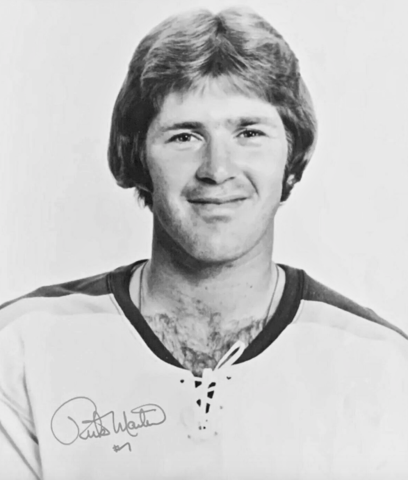 Martin played in the QJHL with the Thetford Mines Canadiens during the 1967-68 season before joining the Montreal Junior Canadiens of the Ontario Hockey Association / OHA. During his first year with the Junior Canadiens he scored 22 goals (21 assists) during the regular season, helping the team win the 1968-69 Hamilton Spectator Trophy as OHA regular season champions. Martin then helped his team win the 1969 J. Ross Robertson Cup as OHA Champions and the 1969 George Richardson Memorial Trophy as Eastern Canada champions. Martin scored a goal in the final game of the season, (2 in the series) as the Junior Canadiens won the 1969 Memorial Cup championship.

Martin had a solid 1969-70 season with the Junior Canadiens, scoring 23 Goals (32 assists) in the regular season, as they won the 1969-70 Hamilton Spectator Trophy.

Martin was on fire in the playoffs, scoring a whopping 28 goals (33 assists), helping the Junior Canadiens win the 1970 J. Ross Robertson Cup as OHA Champions, the 1970 George Richardson Memorial Trophy as Eastern Canada champions, and the 1970 Memorial Cup championship.

Martin played one final season with the Junior Canadiens in 1970-71, scoring 71 goals (50 assists) in the regular season, and 17 goals in the playoffs. He was also picked to the OHA's first all-star team that year.

Martin was picked 5th overall by the Buffalo Sabres at the 1971 NHL Amateur Draft.

In 1971-72, Martin broke teammate Gilbert Perreault's NHL rookie record for goals by scoring 44 of his own. A few months later he was picked as a reserve for Team Canada in the historic Summit Series versus the Soviet Union.

His best season was the 1974–75 NHL season when he scored 52 goals and 95 points in only 68 games. Martin scored at least 44 goals five times in his NHL career.

Martin represented Team Canada at the 1976 Canada Cup, scoring a hat trick to lead Canada in game 1 vs Finland. Canada won the series in overtime vs Czechoslovakia.

Martin was involved in probably one of the three most frightening injuries on Buffalo home ice (the others being when Clint Malarchuk's and Richard Zednik's in separate incidents each had their jugular vein lacerated). Dave Farrish of the New York Rangers hooked Martin around the neck from behind and kicked Martin's feet out from under him, causing Martin to hit his head on the ice. He was knocked unconscious, and went into convulsions. After that play, helmets became a much more common sight on the heads of his Sabre team-mates. (after Martin died in 2011, a later analysis revealed that Martin had stage 2 chronic traumatic encephalopathy, a disease normally associated with enforcers; the damage was believed to stem from a severe concussion Martin sustained in 1977, and it had no effect on his cognitive abilities. Martin is the first non-enforcer to have been diagnosed with the disease, which can only be diagnosed posthumously)

On November 8, 1980, his career was dealt a devastating blow. In a game against the Washington Capitals in the Aud, Martin was racing in on a breakaway. Capitals forward Ryan Walter managed to trip Martin and no penalty was called. Capitals goalie Mike Palmateer, already way out of his crease, knocked Martin back down by kicking his knee, causing severe cartilage damage that all but ended Martin's career.

Martin underwent surgery in Toronto and on March 10, 1981, Scotty Bowman traded Martin and Don Luce to the Kings for a pair of draft picks, one of which the Sabres used to get goalie Tom Barrasso in 1983. Martin played four games for the Los Angeles Kings before hanging up the skates.

In 1989 he, along with the other two members of the French Connection, were inducted into the Buffalo Sabres Hall of Fame. His number 7 was retired along with Rene Robert's #14 on November 15, 1995, flanking the #11 of Gilbert Perreault under a French Connection banner.

On Oct. 25, 2005, Martin was inducted into the Greater Buffalo Sports Hall of Fame.

In 2010, in commemoration of the Sabres' 40th season, The Buffalo News ranked Martin number 4 out of the top 40 Sabres of all time, while he was voted #5 by fans.

After his death in 2011, the Sabres honored his memory by painting the number 7, the number Martin wore for most of his career with Buffalo, behind each goal at the HSBC Arena for the remainder of the 2010-11 season.