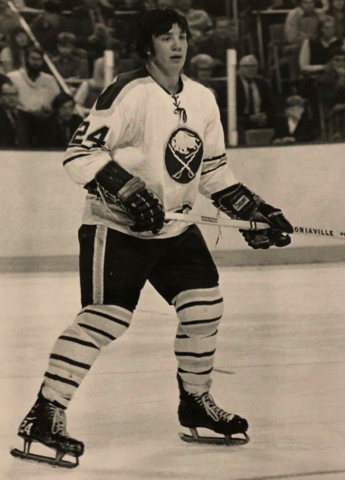 Evans played his first junior Hockey with the Markham Waxers in the Ontario Junior B league, and scored 12 goals, 24 assists during the 1965-66 season, which caught the attention of the Toronto Marlboros, who signed him to start the 1966-67 season. Evans had a strong rookie season on defence for the Marlboros, scoring 7 goals, 21 assists, and then in the playoffs had 3 goals, 3 assists in 26 games, helping the Marlboros win the 1967 J. Ross Robertson Cup as Ontario champions, 1969 George Richardson Memorial Trophy as Eastern Canada champions and the 1967 Memorial Cup championship.

Evans played 1 more season for the Marlboros before turning pro with the Tulsa Oilers of the Central Hockey League / CHL for the 1968-69 season.

Evans was not drafted by a NHL team, but signed as a free agent with the Toronto Maple Leafs, playing in 2 games at the start of the 1969-70 season, but played the rest of the year with the Phoenix Roadrunners in the Western Hockey League / WHL.

Evans played the 1970-71 season with the Kansas City Blues of the CHL, before joining the Buffalo Sabres who had claimed him during the NHL expansion draft in June, 1970. Evans played for the Sabres for the 1971-72 season, and then they traded him to the St. Louis Blues for George Morrison and St. Louis' 2nd round pick (Larry Carriere) in 1972 Amateur Draft, March 5, 1972.

Evans played in St. Louis until they traded him to the Detroit Red Wings with Bryan Watson and Jean Hamel for Ted Harris, Bill Collins and Garnet Bailey, February 14, 1974, and he played out the final 23 games of the season in Detroit.

Evans was then claimed by the Kansas City Scouts from Detroit in the Expansion Draft, June 12, 1974. He was then traded to St. Louis by Kansas City with Kansas City's 4th round pick (Mike Liut) in 1976 Amateur Draft for Larry Giroux, October 29, 1974, and split the 1974-75 season between St. Louis and the CHL Denver Spurs.

Evans then jumped to the World Hockey Association / WHA, playing for the Calgary Cowboys for 2 seasons. In his first season in Calgary, Evans helped the Cowboys reach the semi-finals of the WHA playoffs, where he scored 5 goals, 5 assists in 10 games. The Cowboys would lose to the eventual league champion, the Winnipeg Jets.

Evans was then signed as a free agent by the Edmonton Oilers (WHA) after Calgary franchise folded, May 31, 1977. Then traded to the Birmingham Bulls with Pete Laframboise and Dan Arndt for Lou Nistico and Jeff Jacques, September, 1977, and played just 12 games in Birmingham before he was claimed on waivers by the Quebec Nordiques (WHA), November, 1977, finishing the season with the Nordiques.

Evans then jumped to the Pacific Hockey League, playing for the Phoenix Roadrunners, and had the best season of his career point wise, scoring 9 goals, 41 assists.

Evans then went to Germany to play in the German Elite League - 2.Bundesliga with ECD Sauerland. After almost 2 seasons in Germany, Evans returned to the Central Hockey League, playing his final 6 games with the Wichita Wind before retiring.