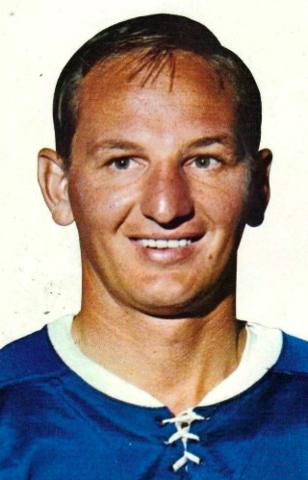 Pappin played his junior Hockey with the Toronto Marlboros in the OHA from 1958 to 1960, turning pro in the spring of 1960, as the Sudbury Wolves of the Eastern Professional Hockey League had him finish the season with them, scoring 1 goal in the final 4 games of the regular season, and also got 1 assist in 3 playoff games.

Pappin played the first half of the next season with the Sudbury Wolves, but he was the property of the Toronto Maple Leafs, and they had him join their farm team in the American Hockey League / AHL, the Rochester Americans to finish the 1960-61 season.

Pappin became a top goal scorer for Rochester the next 2 seasons, and the Maple Leafs took notice, bringing him up to the Maple Leafs for most of the 1963-64 season. Punch Imlach was the coach of the Maple Leafs, and Pappin credits Imlach for pushing him to become a better two-way player. Pappin scored 11 goals, 8 assists during his first NHL season, and played a limited role in the playoffs as the Maple Leafs won the 1964 Stanley Cup championship.

Pappin would split the next few years between Rochester and the Maple Leafs, as Pappin and Imlach were not getting along. Pappin later quoted - "I hated Imlach and he didn't like me." The two found little common ground, especially regarding matters of money.

While most players would be angry about being demoted from the NHL, Pappin thrived in Rochester and became a fan favourite, scoring some big goals for the Americans, and leading Rochester to 3 Calder Cup Championships in 1965, 1966 and 1968.

Pappin started the 1966-67 season in Toronto, but after scoring just 6 goals, Imlach demoted Pappin to Rochester for six games in February 1967. He scored four times in his stint and was recalled to the Maple Leafs. Then, Imlach fell ill. In stepped King Clancy to run a few practices and coach a few games. Clancy put Pappin and Stemkowski together with veteran Bob Pulford in practice and the new trio clicked. Pappin flourished the rest of the season to score 15 goals in the final 22 games.

The Maple Leafs did not make the playoffs the year after the Stanley Cup win. So Imlach demoted Pappin in time to play for Rochester in the AHL playoffs, where he helped them win the 1968 Calder Cup championship with 2 goals, 6 assists in the playoffs.

Pappin was then traded to the Chicago Black Hawks for Pierre Pilote, May 23, 1968, and would play for the Black Hawks for the next 7 seasons, playing on a line with Pit Martin and Dennis Hull. They formed the “M.P.H. Line,”. There, "Pappy" would never score fewer than 22 goals in a year. He passed the 30-goal mark four times and his best season statistically was the 1972–73 season, when he scored 41 goals and 92 points; both career highs.

Pappin and the Black Hawks made it to the Stanley Cup Finals in 1971 and 1973, losing to Montreal.

Pappin considers his seven seasons with the Chicago Black Hawks as the pinnacle of his career, not his time in Toronto.

Pappin was traded to the California Golden Seals with Chicago's 3rd round pick (Guy Lash) in 1977 Amateur Draft for Joey Johnston, June 1, 1975, and played 32 games for the Seals. Pappin was later transferred to the Cleveland Barons after the California franchise relocated, August 26, 1976, playing 24 games before retiring.

After retiring, Pappin became a scout for the Black Hawks, and later the Anaheim Ducks.

But Pappin's story, when it comes to his time with the Maple Leafs, does have a happy ending. After he was traded to Chicago, he gave his 1967 Stanley Cup ring to his then father-in-law, Peter Kyrzakos.

Kyrzakos lost the ring when he crashed into a wave swimming off the Florida coast in the Gulf of Mexico in 1972.

He didn't tell Pappin. Instead, he had a replica ring made up. But Kyrzakos did come clean after his daughter and Pappin divorced. Then, years later in 2007, a treasure hunter found the ring with his metal detector. Pappin paid $1,500 to get it back.

Jim Pappin was inducted into the Rochester Americans Hall of Fame in 1996.