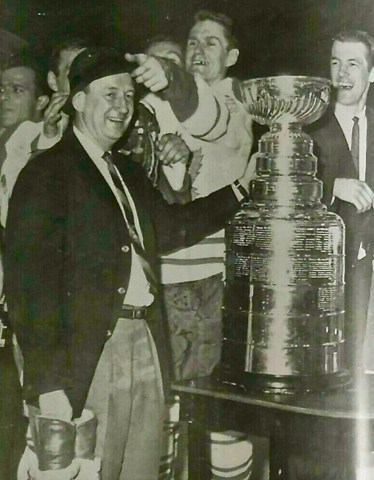 Imlach played his early Hockey for the Toronto Young Rangers from 1935 to 1938, then joined the Toronto Goodyears, playing 2 seasons with them. Interesting is Imlach also played for his employer, the Dominion Bank who had a team in the Toronto Hockey League against other banks.

Punch received his unusual nickname when, while playing for the Toronto Goodyear Seniors Hockey team, he ran into an elbow and was knocked out. When Imlach came to, he began punching his own trainer who had come onto the ice to help him (1 of a few references to this event). Punchy was a named even used.

Imlach then played one season with Toronto Marlboros in 1940-41, and then Lex Cook talked Imlach into playing for the Cornwall Flyers of the Quebec Senior Hockey League / QSHL. He spent 2 seasons there, fractured his wrist, missing most of one season, but helped out in coaching, his first real experience as a coach.

Imlach then joined the Quebec Aces in the QSHL, moving to Quebec City. He played 4 seasons there, and started to be a player coach during his 3rd there, becoming the head coach for the 1949-50 season. Imlach remained in Quebec through the 1956–57 season, also becoming general manager and part owner of the Quebec Aces.

Imlach led Quebec to the 1957 Edinburgh Trophy championship as minor professional champions of Canada. Imlach was then hired by the Boston Bruins and served as the coach and general manager of their Springfield Indians farm team in the American Hockey League / AHL in 1957–58, leading them to the 1958 Calder Cup finals.

On July 10, 1958, Imlach agreed to a two-year contract as an assistant manager of the Toronto Maple Leafs, and then promoted to general manager on November 21, 1958. A week later, he fired coach Billy Reay and took over coaching behind the bench as well. He coached to Maple Leafs to the 1959 and 1960 Stanley Cup finals, losing both times, but gaining valuable experience.

- Edinburgh Trophy Champion 1957 as coach of the Quebec Aces

Calder Cup finalist 1958 as coach of the Springfield Indians.

Imlach owned shares of the Vancouver Canucks of the Western Hockey League, but when Vancouver’s new NHL franchise for 1970–71 was awarded to a different ownership group, he accepted a job as coach and general manager of the expansion Buffalo Sabres.

Selecting Gilbert Perreault as Buffalo’s first pick in the 1970 NHL Draft, Imlach quickly built the Sabres into a contender. He was forced to give up his coaching duties after suffering a heart attack during the 1971–72 season, but as general manager he led the team to the Stanley Cup Final by its fifth season of 1974–75. Over the next few years, the Sabres continued to play well during the regular season but never again enjoyed much playoff success. When the team got off to a slow start to the 1978–79 season, Imlach was fired on December 4, 1978.

Imlach returned to the Maple Leafs organization, tried to change things up, assert his position and had conflicts with team players. Stress was everywhere and Imlach would have a series of heart attacks, finally succumbing to a fatal one on December 1, 1987.