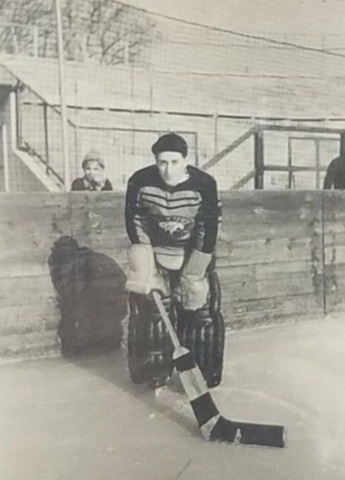 The Trail Smoke Eaters represented Canada at the 1939 World Ice Hockey Championships held between February 3 and February 12, 1939, in Zürich and Basel, Switzerland.

Canada won its eleventh world championship winning all their games while only giving up one goal in the entire tournament.

Scodellaro was credited with being the first goalie to cut down the angle on forwards. Prior to this, goalies were told to stay back in their net to allow them more time to stop the puck. A Toronto newspaper reporter wrote an article urging the NHL Toronto Maple Leafs to adopt his goal-keeping style.

Scodellaro is also credited with developing and wearing the first goal-glove blocker. Prior to this there was no protection on the back of the stick-held hand. During the Allan Cup race, the back of his stick hand was injured when hit by the puck. Team management and players begged Duke to play even though he could not hold his stick. So he taped his stick to his hand and fabricated a protector from sponge and rubber.

A CCM representative saw one game and, after questioning him, got all the details, and the "blocker glove" was born. To this day, the "blocker" is considered to be an essential piece of goalie equipment. Duke developed quick reflexes and would often catch the puck against the blocker.