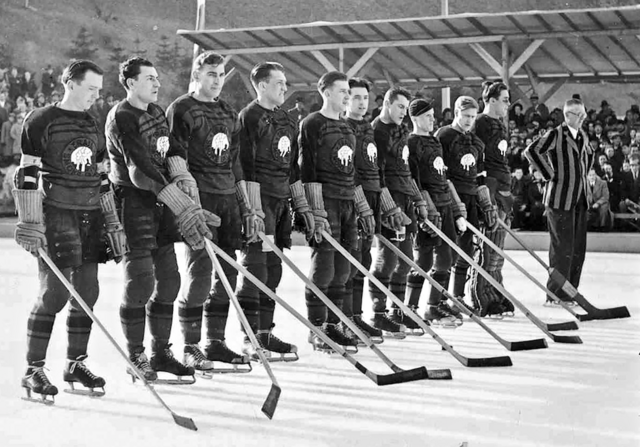 The Trail Smoke Eaters on their 1939 European tour set in the annuals of international Hockey as true ambassadors to the world, and displayed a brand of Hockey that saw excellent stick-handling, superb passing and played a clean game with very little body contact.

The Smoke Eaters embarked from Halifax, Nova Scotia on December 10, 1938, and arrived in Scotland, making their first European showing in Glasgow on December 17th, and won the game 4-2. It marked the beginning of a 55 game schedule, in which they won 53 games, tied one, and lost one. From the time the Smoke Eaters left Trail, until they returned with the World Championship, they played a total of 71 games--they won 62, lost seven and were held to two draws. Trail scored a total of 374 goals, and were scored on 177 times; their average game scored was 5.3 goals scored and the against average 1.5--a remarkable record which will probably never be equallled.

The ten day World Championship Tournament started on February 3, 1939, and was held in Basel and Zurich; two of the greatest little cities perched in the picturesque Swiss Alps. Before the tournament ended on February 12th, the Trail Smoke Eaters had won the hearts of all the Swiss fans, and went about the business of winning the championship in methodical style. Trail sailed through the tournament without a single defeat, and won eight straight games. In fact, they were only scored on once, by Czechoslovakia. The Czechoslovaks proved the toughest team to pass, as the low score indicated. The Smokies met the Czechs in the third round of the tourney, and skated to a convincing 4-1 triumph.

Trail wore their famous, and colourful, orange and black jerseys throughout the European tour.